Student soldiers in the Korean War

As the sixtieth anniversary of the start of the Korean War approaches this Friday, Western media is turning out more and more articles on the UN soldiers and their ROK counterparts.

This includes an AP story on the "student soldiers" who volunteered to fight for the Republic of Korea:


The 15-year-old boy prayed silently beside a freshly dug grave as he and other prisoners waited to be shot by a North Korean firing squad.

Kim Man-kyu, barely taller than his M-1 rifle, had fought with other South Korean student volunteers in an 11-hour battle before being captured just weeks into the 1950-53 Korean War.

"Suddenly, a fighter jet appeared and bombed and fired machine guns at the area," recalled Kim, now a 75-year-old retired pastor. Under attack, the North Koreans abandoned the execution of the prisoners, including some American soldiers.

About 100,000 South Korean students volunteered to fight in the Korean War, which broke out 60 years ago Friday. More than 1,970 perished, according to the War Memorial of Korea, a national museum in Seoul.

Kim was one of 71 students whose story is told in a blockbuster, star-studded film, "71 - In to the Fire," which opened to huge audiences in South Korea last week. The distributor plans to release the movie in the United States and Japan too, though no dates have been set.

That's certainly a movie I shall seek out. 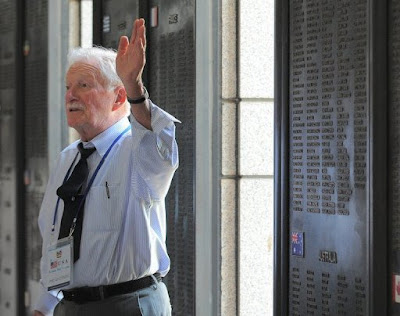 Meanwhile, there is this AFP article on US veterans of the so-called "Forgotten War":


Seoul has invited a total of 300 former soldiers or family members from nine of the countries which fought for the South as part of a United Nations force during the 1950-1953 conflict.

US-led troops from a total of 16 nations battled the North Koreans and their Chinese allies, while five more countries sent medical units.

The US veterans paid tribute to the dead at Seoul's national cemetery before visiting the war memorial and museum.

Joseph Darrell Brassfield, 86, from Olympia in Washington state, was a lieutenant-colonel in the 1st US Cavalry Division.

He recalled the moment when his outnumbered unit faced Chinese troops who crossed the Yalu River border to frustrate the UN advance.

"There was a firefight all night long and we took many, many casualties. On the following day we attacked, and the day after that, we attacked again. But we couldn't get through," Brassfield told AFP.

"When you get into a situation like that, when you have a duty to perform, you don't have time to be afraid. Do what you can because you know your life depends on doing the best job you can."

I have nothing but gratitude for the men and women who fought and sometimes died during that horrible time, and I wish I could more to show it than just blog about it.