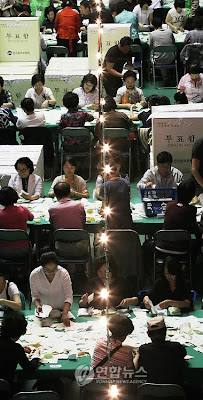 Um, I thought the Hannara Party (aka the Grand National Party) had it in the bag, what with the Chonan sinking fallout and everything. Or are there that many people who are that cynical about the ruling party injecting Chonan-related sentiments during the campaign period (or so I've heard; I'm not actually in Seoul right now).

The ruling party won only six of sixteen governorships and mayorships of the provinces and metropolitan prefectures. The main opposition Democratic Party won seven. The remaining three went to two independents and one member of the Liberty Forward Party, which sounds like it was made-up.

So what happened? Could it be that while President Lee gets good marks for his mature handling of the Chonan response, these local elections had little to do with North-South issues? I guess it also bears noting that the most populous jurisdictions — Seoul, Kyŏnggi-do Province, Pusan, etc. — did in fact go to the ruling party.

Truthfully, though, if the conservatives want to hold onto the Blue House in 2012, it may be all for the best that the opposition has a chance to get hold of the provinces and screw things up there for a while. In Korea, incumbency is nearly a guaranteed ticket to disdain and unpopularity. (I said something similar back in 2006; a good read.)

Anyway, 13,000 foreign nationals with permanent residency voted, as did 80,000 naturalized Koreans. I wouldn't expect to see that kind of thing in California or Hawaii anytime soon. About half of all native-born Kokos, however, couldn't be bothered. Maybe they should stop making it a holiday.

UPDATE:
Marmot has a good round-up of news links related to post-election analysis.