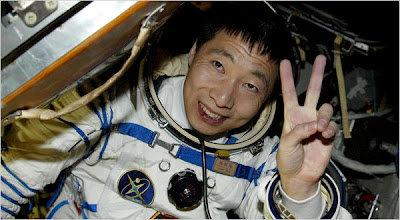 From the New York Times, some clues into the inner workings of Xinhua and other Chinese news agencies and their dual role of providing information and propagandizing:


In a lecture he gave to a group of journalism students last month, a top official at Xinhua, the state news agency, said that the [Earth-orbiting mission by China's first astronaut] was not so picture-perfect. The official, Xia Lin, described how a design flaw had exposed the astronaut to excessive G-force pressure during re-entry, splitting his lip and drenching his face in blood. Startled but undaunted by Mr. Yang’s appearance, the workers quickly mopped up the blood, strapped him back in his seat and shut the door. Then, with the cameras rolling, the cabin door swung open again, revealing an unblemished moment of triumph for all the world to see.

The content of Mr. Xia’s speech, transcribed and posted online by someone who attended the May 15 lecture at Tianjin Foreign Studies University, has become something of a sensation in recent days, providing the Chinese a rare insight into how their news is stage-managed for mass consumption.

Titled “Understanding Journalistic Protocols for Covering Breaking News,” the speech was intended to help budding journalists understand Xinhua’s dual mission: to give Chinese leaders a fast and accurate picture of current events and to deftly manipulate that picture for the public to ensure social harmony, and by extension, the Communist Party’s hold on power.

Indeed, this reminds me a bit of South Korea's press corps in the bad 'ole days of military dictatorship (and maybe a bit after that). Even now, South Koreans often don't trust the media, choosing instead to triangulate between different points-of-view from different media and extrapolating from there. I wonder if Chinese new media's readers, listeners, and viewers are as cynical as that?