Japan advances to knockout round 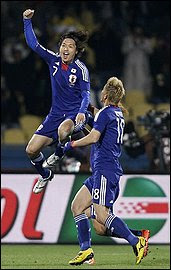 Congratulations to Team Japan, which beat Denmark, 3-1, to win the second spot in Group E, along with the Netherlands.

They join Korea Republic in representing Asia in the Group 16 round of play at the World Cup. They had a record of two wins and one loss in group play. But don't expect to see any Japan-Korea match any time soon; even if both teams make it to the semifinals and then keep going, they wouldn't be matched up until the final game or the match to see who comes in 3rd or 4th.

I don't know how many South Koreans may have been cheering on the Japanese. When both teams made it to the Round of 16 in 2002, when they were sometimes-uneasy cohosts, I knew a few people who wanted to see Japan do well because they wanted to see a Japan-Korean matchup, others who wanted to see Asian footballers do well, and no small number who just wanted to root for their neighbor and cohost (believe it or not, not everybody in South Korea hates Japanese people).

And when Japan got knocked out, I know of at least a few Japan-based Japanese (in addition to the Japanese who I knew in Seoul) who thought that rooting for South Korea was the natural thing to do once Japan was no longer in the running.

Sadly, such folks often get drowned out by the vocal types who, by design, speak up first with their unmitigatable animosity.

Email ThisBlogThis!Share to TwitterShare to FacebookShare to Pinterest
Labels: 2010 World Cup, Are you ready for some futbol?