A picture of Park: Time archives provides a contemporary Western view of a controversial historic figure 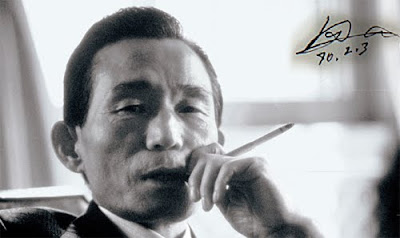 Korea's Mute Press (August 4, 1961)
"Are you aware, General Pak, that the newspapers are afraid to criticize you?" asks a journalist. "This is the first time I have heard of it. If this allegation is true, it is because you journalists are chicken-hearted," the gimlet-eyed boss of the junta that seized power answered.

Gimlet-eyed is Time's description. I wonder if they could get away with that today. Anyway, I thought that was a fitting start for this series of links to Time archives, with descriptions of some that I've had a chance to more thoroughly read. A tidbit:


Last week South Korea's press, which serves a nation of 24.5 million people, readily conceded the point to Pak. "He was asking for a martyr's courage," said Editor Pu Wan Hyuk of the Chosun Ilbo. "We cannot expect reporters to be revolutionaries." Asked a reporter: "How can you tell the precise dividing line between constructive criticism and anti-revolutionary slander? It's better to stay on the safe side."

The fact is that South Korea's newspapers, after a year of heady freedom under ousted Premier John M. Chang, are thoroughly cowed. Hard put to scrape up news that will not offend the tough, jaunty officers who run the country, they dutifully print government handouts verbatim, sometimes run ads two or three times, at no extra charge, simply to fill space. Fortnight ago, when the respected Hankook Ilbo indiscreetly printed a telegram criticizing retired U.S. General James A. Van Fleet's visit at the junta's invitation (TIME, July 28), it was ordered to run off the rest of the edition with the story blacked out.

The Simple Life (February 7, 1964)
Early in his rule of South Korea, President Park closes five of his six presidential villas as an example to other leaders. An austerity plan long forgotten:


So, said Park, government officials must stop driving cars and learn to commute by bus or bicycle, reduce their liquor intake and cut restaurant side dishes to a maximum of three. In keeping with his austere mood, Park advised women to wear their skirts shorter and demanded crew cuts for men. Above all, civil servants must stay out of kisaeng (geisha) houses. That, declared the proprietress of a big kiseng house in Seoul, was carrying things too far. Said she: "Where else can government officials transact their business?"

Trials and Errors (June 24, 1974)
A look at how President Park used an iron fist to crush the political opposition, including how he dealt with future President Kim Daejung, whom he "defeated" in the 1971 presidential election.

The Accidental Assassination (August 26, 1974)
A detailed look at the 1974 assassination attempt on President Park that left his wife dead.

Fingers of Fate (September 23, 1974)
Finger-chopping whackiness (with literal whacking) in Chonan as protesters cut off their left pinky out of anger that Park's would-be assassin (and his wife's actual assassin) was from Japan. They demanded that Japan ban the pro-North Chosoren residents association.


Eastern Modifications (April 28, 1975)
Twisting a phrase by Park (and other East Asian leaders, notably one from Singapore) about East Asia's capacity for democracy, this article takes another close look at then-recent crackdowns on dissidents, including the execution of accused communists who "conspired to overthrow the government by encouraging anti-Park demonstrations."


Survival is at Stake (June 30, 1975)
In this sweeping interview conducted in the wake of America's exit from Vietnam, a somewhat anxious President Park makes the case for why the US military's continued presence in South Korea is essential to ROK and Japanese security. I would consider this one a must-read.


The North: Unceasing Repression (June 30, 1975)
The one takes a break from Park-bashing to note that the South Korean leader "seems positively Jeffersonian compared with his counterpart north of the Demilitarized Zone." A must-read for a contemporary view of Kim Il-sung

The Seoul Brother (November 8, 1976)
Not about Park Chunghee per se, but about a scandal involving some possible attempts by Park regime players to gain influence in Washington. See also Koreagate on Capitol Hill? (November 29, 1976), Seoul's School For Scandal (December 13, 1976), The Swindler From Seoul (July 4, 1977), Still Waiting for Harvest Time (September 19, 1977).

Assassination in Seoul (November 5, 1979)
Questions about "one of the most bizarre killings of a head of state in history." I put this up as a post in its own right back in November 2005, which may have been an inspiration for matt's (of Popular Gusts) own forays into the Time archives.

A Very Tough Peasant (November 5, 1979)
A look back at the personal history and political life of President Park in the wake of his assassination. This also became a post in its own right in November 2005. I would consider this one a must-read, too.

Mouring and Post-Mortems (November 12, 1979)
Further examination of the who's, what's, and why's of Park's assassination.

Normality (November 19, 1979)
"Business as usual" returns to Seoul as the panic, chaos, runs on banks, and scrambles to hoard food that were feared in the wake of Park's assassination did not materialize.

Ten Days That Shook Kwangju (June 9, 1980)
This one is obviously more Chun-related than Park-related, but it comes in the wake of Park's assassination.

Park Chung Hee (August 23, 1999)
Donald Gregg talks about Park as one of the hundred most influential people in Asia, before Rain came to dominate the list.