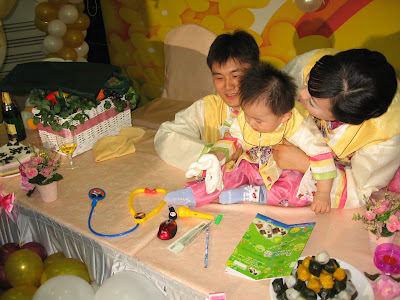 I have no interest in dolls whatsoever (watch it, WK, 'cuz I will ban you), but this piece on the line of dolls called American Girls popped up in my daily trawl of all things Korean:


The Cult of Molly.

“I always wanted her glasses,” says Kristine Untalan, 23, a student at American University. “I faked poor eyesight. I was drawn to her nerdiness.”

“I always wanted her tap dance outfit,” Jessica Stewart says, wistfully. “I never got it.”

“When you choose Molly, you’re sort of putting a stake in a path,” says Stewart, 24, an art director for an ad agency. “It makes it more steadfast, who you think you are.”

In Korea, there is a custom called “doljabi,” by which parents predict their child’s future based on what object he reached for on his first birthday.

In the 1980s America of young girls — at least for a sizable portion — personalities could be determined by the selection of an 18-inch plastic doll, made by the Pleasant Company and marketed under the optimistic brand name American Girl.

Choose your doll, and show who you will become.

And that, ladies and gentlemen, is the frontrunner in this year's award for Most Obscure Korea Reference in News Media.

Doll selection as an American version of tolchabi (돌잡이). I like it. Kudos to the WaPo's Monica Hesse for pulling it off.