The Christian Science Monitor has an interesting piece on the high rate of accidents on Korean streets, among food delivery workers in particular:


In densely populated Seoul, dodging motorcycles that zoom down sidewalks, run red lights, and cut across several lanes of traffic is part of everyday life.

But there has been a steady increase in the number of accidents involving motorcycle deliverymen, raising concerns that Korea's obsession with being fast may need to be adjusted.

In 2009, there were 1,395, part of 4,962 injuries or deaths involving motorcycles in the restaurant and lodging industry during the past six years. And a recent poll of delivery drivers showed nearly 50 percent of those using motorcycles had indicated they had been involved in a road accident during the course of their work.

Though separate figures for fatalities were not available, safety campaigners suggest they run into double digits during the past 10 years.

In an effort to tamp down on accidents, activists have been putting pressure on fast food firms and the government to keep businesses from putting near-impossible delivery deadlines on their drivers.

As anyone who drives in Seoul can attest, one huge factor is the lack of enforcement of traffic laws. In California, for example, I can expect that most traffic violations — with the exception of going over the speed limit as long as it's at the flow of traffic, but including a rolling "California stop" — will invite a ticket if a cop sees it. By contrast, some drivers in Seoul will honk at police officers to run through a red light if they've waiting beyond fifteen seconds for the light to change and no one is coming in the opposite direction.

But I don't think that's all that's at work there. About five years ago over at Lost Nomad, we had a discussion about traffic fatalities that revolved around the fact that Japan also had a fairly high rate of accidents, even though adherence to traffic laws is generally more consistent there.

That leads me to believe that car density is partially at work here. When you have a greater number of cars per 100 square meters of pavement, there are more chances to hit other vehicles or pedestrians. Since I theorized that, I've become intimately aware of how that plays out here in Honolulu, which is far denser than the streets of Orange County and where I have about as many near misses in one week as I would in half a year back in California.

Anyway, back to Korea. Where traffic enforcement works is where it is more consistently applied, usually thanks to technology. On the highways we have have the speed cameras (and they are meant as a deterrent, since they are announced two kilometers ahead of time), more and more red light cameras, and Breathalyzers in the hands of the police manning the sobriety checkpoints.

Add to that mix the so-called "black boxes" that are increasingly becoming compulsory equipment in many jurisdictions:


Enter vehicular black boxes, which record driving data and can be used in the event of an accident to assess fault.

The tools may become mandatory for all vehicles within the next couple of years, says one government auto policy adviser.

“If drivers of cars or buses are presented with something that shows what they did, they can’t lie about what happened in accidents,” says former deliveryman Jang Byoung-kwan.

Hopefully that will do two things. First, punish habitual bad drivers, perhaps to the point that they can no longer be licensed or their insurance rates go up enough for it to hurt. Second, it might actually discourage bad driving habits ahead of time, if the drivers know there's an impartial witness beneath the hood. Thirdly, I suppose it might be a boost for used car sales that aren't so equipped.

I always thought speed cameras on major sidewalks that are triggered by vehicles going beyond the speed of a person running would be in order as well. Anything to get rid of these mooks who endanger the public.

My former fiancée was walking home when she was hit in a crosswalk by an unlicensed, uninsured delivery ajŏshi on a motorcycle, and she was freaked out and then livid that the police pushing her to "settle" had given her name and address to the guy who'd hit her, which basically forced her into accepting his settlement offer.

"S" is not really the confrontational type (except when I did something to piss her off), and she'd had such a harrowing experience that all she wanted to do was just let it go. But I still remember how frantic and freaked out she was the second time she called me. "They showed him my ID… what am I supposed to do? He might come after me!" I couldn't see her, but I knew she was in tears. The uninsured motorcycle guy with the death wish was kinda scary and she was freaked.

Unfortunately, at that moment I was on the other side of town. If I had been at home (we both lived in Yongsan-gu — me near Seoul Station and she there in Hannam-dong) I would have driven over there immediately and made life unpleasant for the other parties. As you might imagine, Kushibo can really raise a stink when he needs to (but a culturally appropriate stink). It probably would have been one of those times where I would have played the "Guess what people I know" card, largely in part to scare the sh¡t out of the motorcycle guy in case he got any ideas.

Sh¡t. It still makes me mad thinking about this. But I digress. 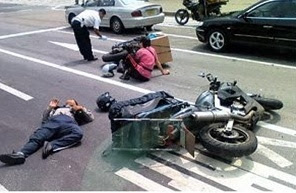