An epic rant (on the difficulty of hiring good teachers) 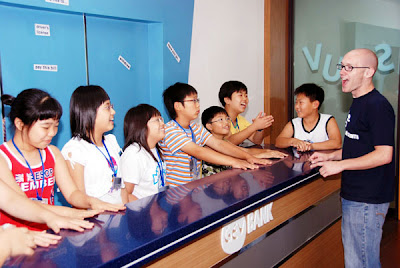 This is from a comment I left at Brian's site two years ago, but in the interest of taking some of my longer, more informative, and/or more researched comments on other blogs and migrating them to my own, I thought I'd reprint this one here in one glorious post.

It starts in response to one commenter suggesting that Koreans don't want native English-speaking "foreigners" to teach English but would prefer to have Koreans teaching English.

[SoKos] want reliable people to teach English. There are some hard-working, clever, innovative, and enthusiastic native-speaking English teachers in Korea — lots! — but there are also some flaky-assed muther fu¢kers who make the whole lot of you look very, very bad, because when hiring schools look at a résumé it's a frickin' crapshoot as to which ones are going to be the guy or gal who doesn't show up on time, doesn't do lesson plans, comes to work hungover on Monday, takes drugs, puts more energy into weekend private tutoring than his/her visa-sponsored (and legal) job, etc., etc.

In the past, I've been in a position of hiring and taking care of "foreigners," and I've gotten really really fu¢ked over by people who just didn't give a sh¡t about their job. There was one person who was hired for a year-long contract and when she heard it might not be renewed started LYING about why she couldn't come in to work. When I confronted her about it, she said she didn't feel obliged because she wasn't going to get rehired — even though she had another two months on her contract and nobody told her she wasn't getting rehired (she was supposed to, but a final decision was not made because of budgetary constraints).

Or the person who made me drop an entire day's worth of work and skip my own grad school classes because she'd lied to us about getting her visa paperwork done, forcing me to go and grovel to immigration.

Or the person who promised to be at a certain place at a certain time but then called in sick because she was actually hungover. Twice in two weeks.

Or the person who walked out because the money wasn't being paid up front instead of at the end like everyone else was getting, while cussing out my superior because the Koreans were all trying to cheat him.

And that was just last week. ;)


And through all this, the native Koreans I work with are just standing there with a collective bewildered look of "WTF???"

And I and every foreigner working with us — Korean or White or Black — is just wanting to shoot these people because it is THEY that are making Koreans distrust foreign workers in Korea because it is such a crapshoot.

Do none of you work with flaky people like I described? Am I just incredibly unlucky in who we encountered? The experience of others I know says, "No," it's par for the course. I know that for each one of these flakes, there are several more who do a passable job, and at least one or two people who really go the extra mile, but there is an inherent insecurity about which ones will that be.

And THAT — plus the lack of time investment that an outsider has put into getting into his/her position — is why the Kwangju School Board or the Seoul Ministry of Education is loath to entrust a handful of "foreigners" (God, do I hate that word) with greater responsibility and authority.


The discussion itself was interesting, and I encourage you to go to Brian's and read the rest. One person suggested that "a lot of it could have been avoided if the organization you were employed by took the time to do interviews and get to know the people you were bringing over." To which I replied:

Interview?! We were supposed to interview them?

Seriously, though, we did interview them. Each and everyone one of them, except for the guy who thought Koreans were cheating him by not paying him up front; he was recommended by someone I knew.


And that is another problem in the Koreans-versus-foreigner dynamic: there is a tendency whereby Koreans feel responsible if they recommend someone for a job (even to the point of troubleshooting if there is a problem) whereas Westerners would recommend whomever is available, and then assume they're doing you a favor (which they are).

There are loads of exceptions to this (I know plenty of Westerners who act very "Korean" about recommendations for important positions, and I know lots of Koreans who go against the Korean grain on this), but it's a good rule of thumb when it comes to understanding the different POV where Koreans and Westerners might be coming from. ...

Even though interviews are a highly imperfect process, it is better to do them than to not. There are types of people you will weed out in an interview that you wouldn't if you saw them just on paper. But narcissists and charisma men who do well in interviews can also be among the least dedicated to their job and workplace, so that's part of the crapshoot.

Email ThisBlogThis!Share to TwitterShare to FacebookShare to Pinterest
Labels: English teaching in Korea, foreign residents, in other blogs