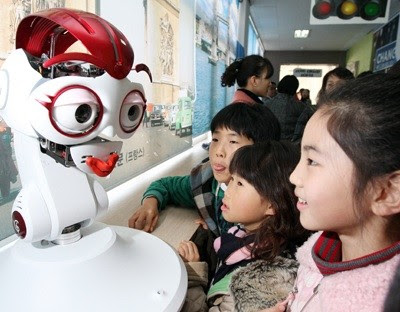 Engadget, which is where I get most of my iPhone news, has an article on Kiro, the Robot who can do anything, including your job, whatever it is:


Developed by Korea's Robot Research Institute, the bot recently wrapped up a three week trial period in a kindergarten classroom, where he apparently spent most of his time screening educational videos on his abdomen, playing interactive games, and keeping his students in rapt attention. When he wasn't busy dishing out Ritalin to his underlings, Kiro also served as a guide at the Dong-A University Museum, in Busan. After programming the droid with enough knowledge to make him sound smart, engineers set him loose within the art gallery, where he would provide visitors with background information in hushed, docent-dulcet tones. He loves kids. He loves art. He's always smiling. He's the kinda bot you could bring home to Dad.

I don't know... I've been to the future and I've seen what really happens when robots rule the classroom.

By the way, this is not Engadget's first article on Kiro.

Email ThisBlogThis!Share to TwitterShare to FacebookShare to Pinterest
Labels: robots