Okay, I'm not really saying that these places are becoming Koreanized or that Korea is actually exerting more influence. Rather, this is a term I like to use when something happens in America (or elsewhere) that Korea bashers and naysayers had characterized as unique to Korea (OINK: only in Korea), typically something that "would never happen in the US."

Alternatively, it can include things that have happened in America (or Canada, etc.) but, were they to happen in Korea, the commentariat in the K-blogosphere peanut gallery would be all over it as racist, nationalist, jingoist, backwards, etc. 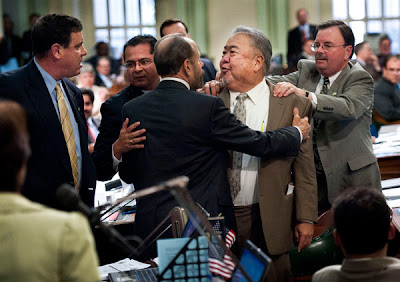 The first is a "skirmish" that occurred in the California State Assembly. And while it can't possibly compare to the furniture-breaking, skull-cracking donnybrooks that have broken out in the halls of power in Seoul (or Taipei), that it happens at all in Sacramento is a bit shocking.


It all began when Assemblyman Don Wagner (R-Irvine) likened a portion of the Democrats’ budget plan, a plan to eliminate redevelopment agencies, to a “Tony Soprano” insurance scheme.

Assemblyman Anthony Portantino (D-La Cañada Flintridge) quickly rose to say that “as a proud Italian American, I resent that and I would respectfully ask the commenter to make an apology to Italian Americans in California."

Wagner retorted, “I will apologize to any Italian Americans who are not in the Mafia and engaged in insurance scams,” to audible murmurs and grumbling in the chamber.

Then Wagner rose again. "My apology, if one is needed, is sincere," he said. "My reference is certainly not one that no one in this room gets… I think my colleagues on the other side of the aisle, especially one who seems to be extraordinarily outraged over this for reasons I don't understand -- my reference is not lost on anyone here. This is not an attack on anyone. This bill is a bait and switch."

Moments later, Assemblyman Warren Furutani (D-Gardena), who is not Italian American, hustled over to confront Wagner and the two had to be separated by colleagues.

I found the part in bold somewhat amusing. I suppose, though, that some people without much exposure to Japanese surnames or who'd never driven through Gardena might assume a person named Furutani could be a paisano. For a long time I assumed Marisa Tomei was part Japanese. 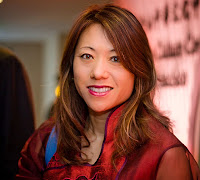 And next we go from Ca. to Fla. It seems one sports writer for the Orlando Sentinel who is perturbed about furriners winning American golf tourneys:

But wait, there is hope for the red, white and blue. South Korean K.J. Choi, who was just granted American citizenship, will win this tournament. And then U.S. golf will be like many other products Americans enjoy: “Made in Korea.”

Of course, the American golf establishment isn't exactly the most international-thinking group you ever saw, so I shouldn't be surprised at the sentiment. But just imagine this were switched to the Korea Open and it was likely to be won by Americans who are starting to dominate golf, and just picture the reams of comments at, say, The Marmot's Hole, about how this is symptomatic of Korea's deep-seated xenophobia.

They'd also get on the case of the reporter for calling the newly minted South Korean, in our hypothetical role reversal, an American.

I should, perhaps, take my own advice and not get too worked up over a hypothetical that hasn't actually happened (yet).