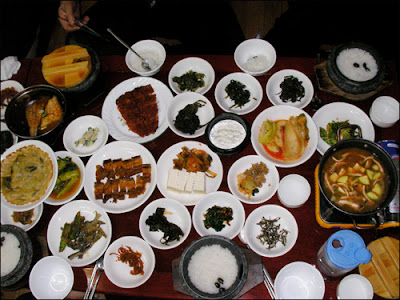 From KoreaBeat, we get a story that many restaurants, including such ubiquitous mom-and-pop neighborhood chains as Kimbap Ch'ŏn-guk (김밥천국, Kimbap Paradise"), have been doing what many suspected was happening but are still grossed out by: the recycling of panchan.

From the KB translation:


A study has found that food products continue to be re-used. 98 well-known restaurants, including Kimbap Cheonguk, 밥&죽, and 지호한방삼계탕, were caught by health authorities.

According to Korea Food and Drug Administration statistics released to the office of Democratic Party National Assembly Representative Lee Nak-yeon, 98 restaurants nationwide were caught re-using left-over food last year, showing that the practice continues the same as ever.

Panchan, if you're not up to speed on Korean cuisine, are the myriad little "side dishes" you get at a Korean restaurant or even in a Korean home (it would seem panchan, spelled banchan in the atrocious Revised Romanization, means "half a dish," but the hantcha [飯饌] is closer to rice-food). If you don't eat everything on that little plate, the restaurants are supposed to dump the rest, but inside homes, recycling is probably the norm.

It would seem the illnesses you are most likely to get from recycled panchan would be things that show up much later and therefore are hard to trace back, like tuberculosis, H. pylori infection (which causes gastrointestinal ulcers and ultimately stomach cancer), and possibly hepatitis.

I rarely eat the panchan served in the cheap eateries for this reason, but I would find it disturbing if it's also the case at more expensive places, even middle price-range restaurants.

Maybe the unlimited panchan practice simply isn't sustainable anymore. Here in Honolulu, I got annoyed to find that the best-known Korean restaurants, like Sorabol, charge you for refills on certain panchan, but maybe that really is the way to go.

I just hope that the investigators have some teeth: if the cost of the fines (including being temporarily being shut down, if that's a possibility) is greater than what can be saved by recycling panchan, then maybe the practice will dramatically decrease.

In the meantime, maybe we as consumers can do our part by taking our leftover panchan and mixing them all together in a mishmash that the restauranteur can't possibly serve to the next customer.