That's right, Korea once had a royal family. An imperial family, in fact. But that all ended with the annexation of the Taehan Empire (what Korea was officially called back then) by the Empire of Japan, and the concomitant absorption of Chosŏn's imperial family by the Japanese. After liberation, few were interested in re-establishing the royals, even as figureheads. 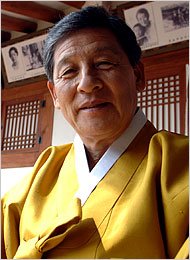 I wrote about it here and here, while The Korean later wrote about it here. Now the Washington Post is running an article about one of their reporters' visit to Yi Sŏk (Yi Seok), a once down-and-out crown prince who has achieved a sort of rehabilitation thanks to the government of the provincial city of Chŏnju, who sees him as a chance to promote their city.


Born in 1941, long after his family had lost power but before it was expelled from its royal homes, Yi Seok spent his early years at Sadong Palace in Seoul. His mother was one of 10 wives of Prince Uiwha, and Yi had more than 20 siblings. He reminisced about going to school escorted by handmaids and following a strict code of princely behavior: Running was undignified; making noise at dinner was forbidden.

The [ruling Yi family's] five-century reign came to an end in 1910, when Japan colonized Korea. After World War II, the expulsion of the Japanese and the country’s division, North Korea pursued a different kind of family dynasty. But in the Republic of Korea, leaders these days are elected, and daily life has less and less to do with the country’s royal roots.

As the prince put it, “Korean people, they don’t care about the royal family. They just care about democracy.”

By the time Yi finished college, his family had few remaining assets. He found a job singing in hotel bars and on military bases. Although his new career embarrassed some relatives, “the singing prince” became popular. A ballad that he wrote, “Nest of Doves,” became a wedding favorite. There in the living room, he broke into another tune he liked to sing, from “West Side Story.” “Tonight, tonight, there’s only you tonight,” he crooned.

Yi went to Vietnam during the war, entertaining the U.S. troops and taking a bullet in the shoulder from the Viet Cong. He left Korea again in 1979, when the royal family was officially evicted from the palaces during a military coup following the assassination of President Park Chung Hee.

He went to the United States on a tourist visa and stayed, cleaning pools and working as a security guard in Los Angeles. Paying a Korean American woman to marry him in Las Vegas, he applied for a green card.

When his aunt died in 1989, he returned to Korea for the funeral, but there was no homecoming. By then, the Changdeok Palace in Seoul, the last royal residence, had become a tourist destination. Some nights he climbed over the wall and slept on the floor in one of the buildings, he said.

He told us that he’d tried nine times to commit suicide. After the publication of the newspaper story about him, Jeonju officials found him and offered him a new beginning. Now Yi lives there part-time, while also maintaining an apartment in Seoul and traveling around the country to speak about his family’s past.

There's more to the article than just that, so go have a read.

Articles like this naturally spark questions about whether it would be beneficial, prudent, or wise to restore the royal family, at least in a ceremonial capacity with no real political power, à la Britain or Japan.

But with the two Koreas divided, that would no doubt be controversial, and perhaps very socially divisive among South Koreans as well. Would the restored royals have jurisdiction (even ceremonial jurisdiction) over territory occupied by the DPRK regime? When unemployment rises or the national budget has a hole in it, would people support putting up the royals in whatever level of luxury they are given? For that matter, who should be given such a lifestyle (read my link and The Korean's link above for insight into the murky question of succession)?

On the other hand, perhaps the trappings of a royal family could actually bring in more tourist dollars than it would cost. Perhaps a new king or queen (I guess they wouldn't be emperor and empress anymore) could be a source of stability and cohesion. Who knows.