Last year we reported on the plans of a certain Korean company, CT&T, to build electric cars with existing technology right here in the Aloha State, but now we're getting word that the venture is in trouble. In fact, it's kind of a no-show.

From the Honolulu Star-Advertiser:


Korean electric car company CT&T made a splash in three states when it rolled shiny, tiny vehicles off big rigs and announced with smiling governors that it would hire hundreds of Americans to build them in new factories.

But those plans have stalled in Hawaii, Pennsylvania and South Carolina without anyone hired, any plants constructed or any electric cars assembled.

The South Korean electric car and golf cart manufacturer has apparently abandoned its pledge to the three states — without notice — and deserted its new U.S. markets amid financial difficulties, The Associated Press has learned.

Meanwhile, an American subsidiary, CT&T United, is in the process of separating from Seoul-based CT&T and hopes to take on North American ownership and attract more U.S. investors, James Park, vice president of the subsidiary, told the AP in a phone interview Thursday.

He said CT&T United is abandoning plans for facilities in Pennsylvania, but the company still wants to build in Hawaii and South Carolina. Park said the U.S. subsidiary hopes to raise $250 million to move forward with its plans.

But there have been no signs of any progress, state and business leaders said.

Since the governors of all three states attracted publicity and news coverage for CT&T, the company has gone silent. Its phone lines in Atlanta and Los Angeles have been disconnected, and the website for CT&T United remains under construction.

CT&T had said in May of last year it intended to build an assembly facility in Hawaii that would employ up to 400 people and produce up to 10,000 vehicles a year. Hawaii hailed the automaker as it has struggled for years to diversify its tourism-dependent economy and shed its image as a difficult place to do business because of high costs, taxes and red tape.

That doesn't sound good at all. Hawaii is hurting for jobs, and it so desperately wishes to break out of the economic mold that is dominated by tourism, the military, and the agriculture that still exists. Perhaps the US subsidiary will be able to work better if it isn't constrained by a parent company thousands of miles away. 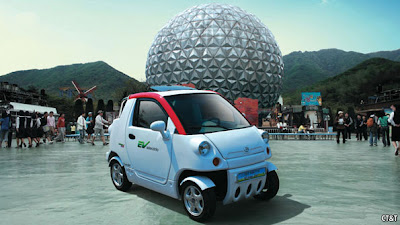 Indeed, CT&T has promise. The Economist had glowing things to say about what makes it work and its potential in an island setting like Oahu:


Its flagship model, the eZone, is a quirky two-seater aimed at housewives, the elderly and those making the daily school run. It has a range of 100km and can clip along at 70kph if you really put your foot down.

It is a proper car, though. In particular, it is the only low-speed electric car to have passed international front and side crash tests, meaning that it can go on general sale. That will happen in Europe any day now, with a starting price between $8,000 and $16,000, and CT&T has plans to introduce the eZone into Hawaii (one part of the United States where journeys are, by definition, short) in two years’ time, when a local factory is up and running. It is also cheap to run. The firm claims that 1,500km of urban driving—about a month’s worth—will cost a mere $7 in electricity bills. ...

Critics of electric cars frequently argue that their viability depends on government subsidies. Not so the eZone. CT&T’s use of simple, existing technology, as well as its country of origin—the South Korean government has shown a distinct lack of interest in handing out cash to electric-car drivers—means it is an exception which overthrows the rule.

Point of information: there are in fact some places in Hawaii where you can drive pretty far. From Hilo to Captain Cook, going over the Saddle on the Big Island, for example, is about a hundred miles, and that's by no means the farthest you can travel on the Big Island. Maui also has some long drives, as does Oahu if, say, you're commuting from Haleiwa to Ala Moana.

But I digress. For the most part, 100 km (about 60 miles) is sufficient for most people on Oahu, or in Southern California for that matter. It's doable, especially at $4/gallon gas.