Honolulu overdue for a hurricane?

Honolulu topped the Weather Channel's list of the five cities most overdue for a hurricane:


Why, you may ask, are officials in Hawaii going to such great lengths to plan for a major hurricane strike in Honolulu? That’s never happened before, has it? No, not in the available records, despite a long list of close calls. Are these emergency managers wasting their time?

The reason that their time is well spent is that there is no meteorological reason why the core of a major hurricane cannot directly strike Honolulu. Iniki in 1992 made a direct hit on Kauai, only about 100 miles west of Honolulu, at major hurricane strength. Ten years earlier, Hurricane Iwa struck Kauai in late November. A number of other major hurricanes have passed just south of Honolulu during the past several decades.

The prospect of a major hurricane striking Honolulu is scary, especially if the center of the eye passes just west of the city and places the strongest, onshore winds where the most people and infrastructures are located. The winds alone would be bad enough, with most homes not built to withstand hurricane-force winds, many of them perilously perched on mountain slopes, and numerous high-rises that would lose windows especially on upper floors. Add to that the flooding because of waves and storm surge that would occur near the coast as the ocean moves inland, plus rainfall-induced flooding that could send water rushing down the mountains from the opposite direction. 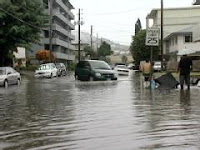 I myself live inland enough and high enough to avoid an ocean surge (you may recall that from the posts about tsunami warnings here, here, and here), but the flooding from runoff coming down the mountains is a danger to anyone living near one of the ubiquitous streams. And I do live on the ninth floor of a building that is built lanai-style, meaning the kitchen floor is completely open air. It would be downright dangerous to be there during hurricane-force wins.

By the way, San Diego was #2 on the Weather Channel's list (and Orange County and Los Angeles would be runner-ups for that).

Email ThisBlogThis!Share to TwitterShare to FacebookShare to Pinterest
Labels: around Honolulu, hurricane