My goodness, gas stations running out of gas. That is serious, and it's no wonder that reserves are being released (a move also being done by the Obama administration). 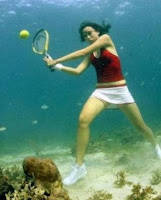