I'm not sure what they're smoking down in Brazil, but it makes them come up with things that would not go over well in the United States.

Courtesy of Huffington Post, we get word of this Kia of Brazil (?) advertising campaign that won a silver at the Cannes Creativity Awards. 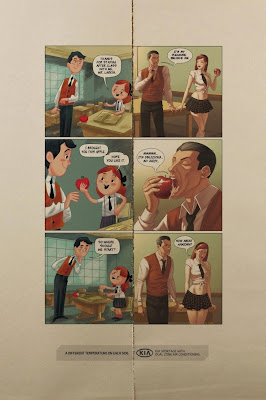 Above is the offending picture (click it to enlarge and read the text). The idea is that the small-size Sportage SUV has a dual-zone climate control, so the two sides of the car can have very different temperatures, exemplified by one side being kiddish, and the other side very adult. 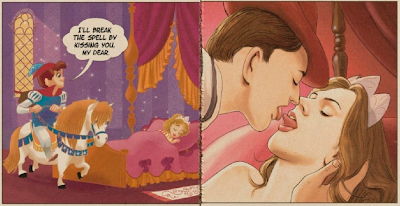 The other ad in this series makes the point with more clarity and less controversial. It depicts a cartoonish prince charming coming in to a castle, declaring in the upper left frame that he will break the spell that has the princess in a deep sleep by kissing her. In the upper right frame, in a style more reminiscent of the cover of romance novels, he is approaching her with both their tongues out, ready to Freedom Kiss. 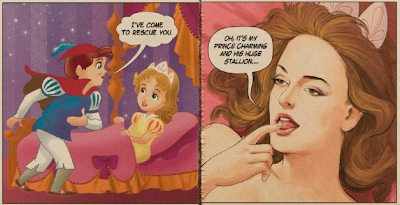 In the middle left frame, the re-cartoonized prince (who looks a little like a slim version of Bob of Bob's Big Boy) is declaring to the re-cartoonized princess (who does look a bit younger than the steamy romance novel version of the princess) that he has come to rescue her. In the middle right frame, with her finger enticingly on her mouth, she declares, "Oh, it's my Prince Charming and his huge stallion." 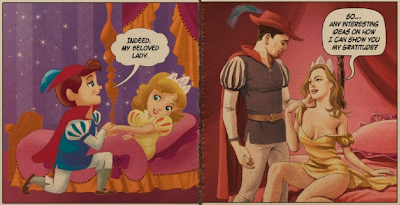 Okay. In the lower left frame, the re-re-cartoonized prince takes the princess's hand and dreamily says, "Indeed, my beloved lady." (Lady, so she's of legal age, I guess.) But in the lower right frame, the romance novel version of the princess, whose dress is falling off and practically revealing her boobs, asks if the prince has any interesting ideas on how she can show him her gratitude.

Okay, then. One side is kiddish, and the other side is adult. Dual themes of the same scene. But in the prince-rescues-princess sample, there are no hints at something untoward. Not so with the ad way up above, where at the very least, it seems to be promoting the idea of teachers and students becoming sexually involved. At worst, it inserts the very icky suggestion that an adult figure might look at young and innocent schoolgirl as a sex object.

Okay, this Brazil and France, where, I'm guessing, anything goes, relative to the US (or South Korea). But in America where pedophilia and sex with minors are are very serious issues, this is offensive. Some two-thirds of the HuffPost readers think so, anyway.

Frankly, I can't imagine this fitting in with the old adage that there's no such thing as bad press. It's one thing to sell sex (and loads of people say they're offended by that, but it always manages to get attention), but it's another to seem to pander to pedophiliac proclivities. Really, even if that was not the intent of the ad creators, it's such an obvious conclusion for just about any reader, and I can't see how Kia can get out of this without distancing itself from this ad and apologizing. That is, if this news gains traction.

UPDATE:
Prompted by a comment from gbnhj at The Marmot's Hole, I went looking for news that Kia had denied they had anything to do with this ad campaign. At this site I found a denial by Kia:


Kia Motors America (KMA) has become aware of an offensive piece of advertising material that was created by an ad agency in Brazil that KMA has no business relationship with and has never worked with. This ad was not created in the U.S. by Kia Motors America or any of its marketing partners and does not reflect the opinions or values of KMA or Kia Motors Corporation. The ad is undoubtedly inappropriate, and on behalf of Kia Motors we apologize to those who have been offended by it. We can guarantee this advertisement has never and will never be used in any form in the United States, and our global headquarters in Seoul, South Korea is addressing the issue with the independent Brazilian distributor.

That site says the advertising company broke the rules by submitting an ad campaign that was not actually run, and they appear likely to get the prestigious award yanked. In an earlier posting, they had harsh words for Kia, along with some interesting background on other award-winning ads' boorishness (see below for an example involving Hillary Clinton and Barack Obama in a Reporters Without Borders advert, with the caption, "Censorship tells the wrong story"). 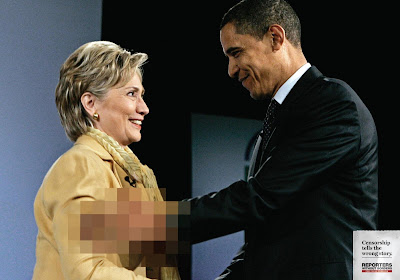 That actually reminds me of a gag series I'd been planning for a future post, one inspired by an old gag on Jimmy Kimmel Live: inappropriately pixelated pictures of Kim Jong-il. 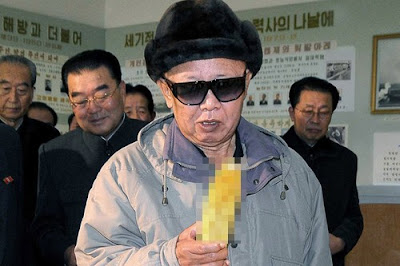 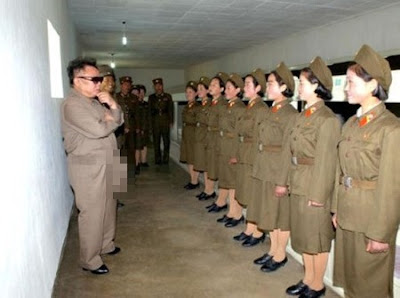 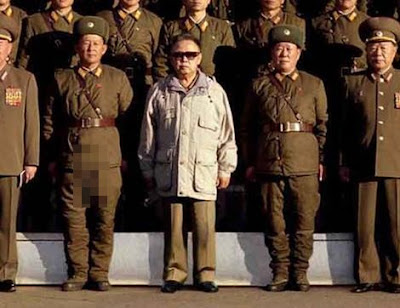 Instead of getting back to work, I perused a number of posts at the very interesting BNET advertising blog, The Tagline, which included this bit of Hitler-themed artwork at right. In fact, I had written a post on this back in September 2009, with a title I am embarrassed to have written but which still cracks me up.
on June 28, 2011