Is the Airbus A380 just too danged big? 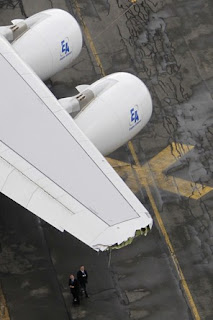 The gargantuan Airbus A380 recently delivered to Korean Air is being called back to France to fill in for special duty. Apparently Airbus's own representative A380 got the tip of its wing lopped off when it hit something on the ground. From the WaPo:


Airbus’s star jet was grounded Sunday after clipping a wing on a taxiway structure, forcing the European jetmaker to cancel demonstration flights it had planned at the Paris Air Show. The A380 superjumbo collided with a building at the Le Bourget airport, where the air show is taking place.

The A380 collision was the latest in an embarrassing string of incidents at the air show for Airbus, which was forced to pull its military transport carrier A400M out of displays because of an issue with its gearbox.

But Monday, Korean Air Lines jumped to the rescue, offering Airbus one of its A380s to fly.

During the demonstrations, Airbus’s own double-decker aircraft sat sadly idle with its right wing-tip covered, hiding the damage, according to the Wall Street Journal.

I guess the "A" is for albatross. Or some other awkwardly maneuvering bird beginning with that letter.

Email ThisBlogThis!Share to TwitterShare to FacebookShare to Pinterest
Labels: Airbus A380