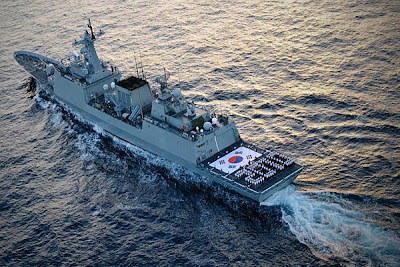 [above: A file photo of the Chungmugong Yisunshin, which has caught up with the Samho Dream, which was hijacked by Somali pirates. Their own preparedness will likely be enhanced if they stand down from the "2010" formation on their deck.]

Well, that was fast. And now that they're there, it's time to play the waiting game.


A South Korean navy destroyer has caught up with a supertanker hijacked by pirates that is cruising toward the Somali coast with a cargo of crude oil worth as much as $170 million, an official said on Tuesday.

The South Korean-operated, Singapore-owned Samho Dream, which can carry more than 2 million barrels of crude, was seized on Sunday en route from Iraq to the United States, in the latest sign the sea gangs are targeting bigger quarry.

The destroyer, equipped with weapons that can hit targets as far as 32 km (20 miles) away and a Lynx combat helicopter on board, was shadowing the tanker as it headed for East Africa, a South Korean official said.

He declined to comment further on what was being planned by the naval unit, which was deployed last year to protect commercial vessels in the Gulf of Aden and the Indian Ocean.

The 319,000 deadweight tonnage Samho Dream, which was built in 2002, is carrying crude oil that could be worth as much as $170 million at current oil prices. It holds the equivalent of more than one day's worth of Iraqi exports.

UPDATE (April 7, 2010):
This story is now being carried by Reuters (via the New York Times), BBC, the Joongang Daily, and the Korea Times.