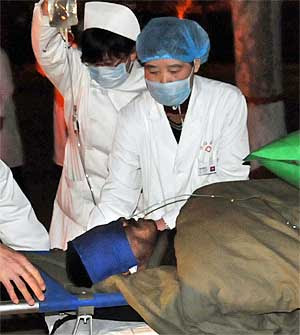 I thought I'd cut into all the negative stories about cartoonist, sunken naval ships, etc., etc., with a heart-warming story with a (mostly) happy ending. It's about the rescue of a group of Chinese miners that had been trapped deep below the surface of Shanxi Province for eight days and eight nights:


For once, it was good news that came from the depths of a Chinese coal mine as 115 workers were rescued Monday after eight days and eight nights trapped deep inside a mine in Shanxi province.

The extraordinary rescue turned into a round-the-clock reality show with state-run TV broadcasting live footage of the rescue workers carrying out the miners to a cheering audience. Rescue crews were still hoping as of Monday night to bring out 38 more miners.

Although the miners had their faces wrapped with towels to protect their eyes after so many days in darkness, their elation was evident. Even lying flat on his back, one clapped and gave a high-five to a rescue worker who had carried his stretcher.

The miners had been trapped since March 28; that's when, according to one survivor, a tidal wave of water came rushing into the mine they were constructing in Wangjialing, about 400 miles southwest of Beijing.

During the construction process, the workers hit an abandoned mine shaft filled with enough water to fill more than 50 Olympic-size swimming pools.

"I am really amazed that the miners held on in the mine shaft for eight days and eight nights,'' Luo Lin, head of the State Administration for Work Safety, told Chinese television. "For them to survive after such a long time, it's really a miracle.''

I'm happy that those 115 are alive, and my prayers go out to those who remain. And I'm tickled that Chinese officials are talking about "miracles."

Email ThisBlogThis!Share to TwitterShare to FacebookShare to Pinterest
Labels: China