The iPad is here, finally.

The iPad has at long last arrived, and it has already been a boon to the economy: In the days prior to Saturday's highly publicized release, there was a significant rise in camping equipment.

I was not among those who braved sub-60° nights to wait for as long as 24 hours outside the Apple Store just so they could get their hands on this masterpiece of glass and aluminum.

In fact, I didn't even try to visit one of the three Apple Stores within a three-mile radius of my abode (why we have such a concentration is beyond me, but I'm not about to complain). I may go tomorrow, as I promised to take someone to Pietro's Pizza (a Japanese chain of Italian restaurants that used to exist in Korea) at Ala Moana, but if there's a long line, I'll just walk on by and check it out later. I'm in no hurry, since I can't buy one now anyway. (Please, dear readers, please, go and click on all the ads every time you come here).

But Apple's doing just fine without me: They sold 700,000 units yesterday. Just as a comparison, the iPhone has only in the past week or so, after a four-month run, finally reached half a million units sold in South Korea, so this iPad thing is crazy huge. Craaaazy!

And now that the public has finally gotten their sticky little fingerprints on the iPad's screen, we're starting to see some reviews. David Pogue at the New York Times wrote not one, but two reviews: one for techies and one for the rest of us:


In 10 years of reviewing tech products for The New York Times, I’ve never seen a product as polarizing as Apple’s iPad, which arrives in stores on Saturday.

“This device is laughably absurd,” goes a typical remark on a tech blog’s comments board. “How can they expect anyone to get serious computer work done without a mouse?”

“This truly is a magical revolution,” goes another. “I can’t imagine why anyone will want to go back to using a mouse and keyboard once they’ve experienced Apple’s visionary user interface!”

Those are some pretty confident critiques of the iPad — considering that their authors have never even tried it.

In any case, there’s a pattern to these assessments.

Therefore, no single write-up can serve both readerships adequately. There’s but one solution: Write separate reviews for these two audiences.

I definitely see the value in writing a review that caters to us regular, unwashed masses who have no idea how these things run. I'm an Apple fan because I don't know how to write code or solve intensive problems, and so I often just don't give a rat's bum about techies who say the Mac or the iPad is missing some thing on a PC that I've never heard of and despite the lack of which my world has not ended.

And apparently there are millions like me. Millions like the two guys below. They look pretty happy, having just snagged their iPads at The Grove in Los Angeles. Actually my primary motivation in putting up this picture was to point out that these two men, particularly the gentleman on the right, have oversized Jib-Jab style heads that look like they don't belong to the bodies they're attached to. 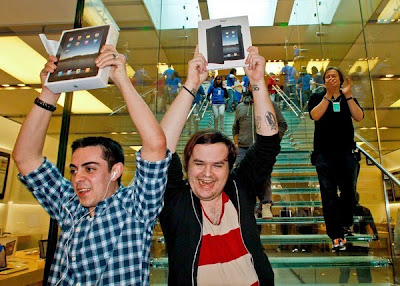