Kim Jong-Il has hosted a dinner party for the new Chinese ambassador to North Korea, state media said Sunday, amid reports the reclusive leader was set to visit Beijing.

When Kim appeared with new Chinese ambassador Liu Hongcai, "all the participants warmly welcomed him with highest tribute", it said.

"They expressed the steadfast will of the parties and peoples of the two countries to further develop and consolidate generation after generation," the agency said.

The dinner fuelled speculation that Kim's anticipated visit to Beijing is being delayed, the South's Yonhap news agency said. But local television reports did not rule the possibility of a trip this week.

South Korean officials said last week there was a "high level of possibility" that Kim would soon visit China. Kim previously travelled by train to China in 2000, 2001, 2004 and 2006. He reportedly dislikes flying.

The story is also being carried by AP and Yonhap. Meanwhile, UPI is reporting on the earlier reports.

The North Korean report, if true, would seem to suggest that earlier reports of KJI being in China are not true, since they had him arriving in Dandong at 3:50 a.m. on Saturday. But the assassination fears and worries about instability mentioned in that link are still valid. 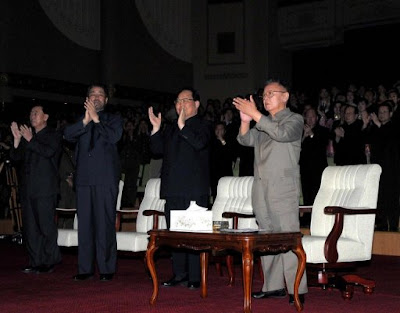 [above: Can't this guy be bothered to dress up? If you're always dressed in the same Leisure Suit Larry action figure get-up, you'll never quell accusations of being a photoshopped Bernie, as in "Weekend at."]