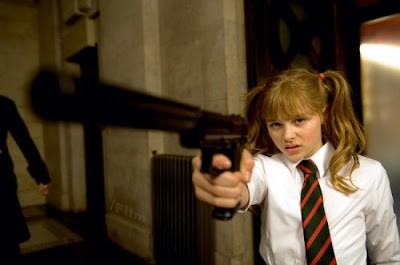 It looks like the profanity-filled and comically violent adaptation of "Kick-Ass" has been banned in South Korea because it's just too offensive:


Matthew Vaughn’s comic book adaptation has come under much criticism for its profanities, specifically the c word from the 11 year old hit-girl character played by Chloe Mortez. However Vaughn defended the film from such criticism by saying he has yet to receive a single complaint, but it now appears that the films stream of bad language and particularly the violence of Hit-Girl has caused South Korean officials to ban the film from its cinema screens.

South Korea has a history of banning offensive films – only last year the poster for Park Chan-wook’s Thirst was banned, and they have previously banned films including Kubricks A Clockwork Orange, horror thriller Scream and Apocalypse Now.

A Clockwork Orange? Apocalypse Now? When someone says someone "has a history" of doing something (like banning offensive films), I'm imagining that they do it a lot or regularly; I'm not imagining that you have to actually go back into history to find an example. Orange and Now were from the Park Chunghee era (the latter just barely), some three or four decades ago.

Anyway, as one of those prudes who thinks movies and TV have pushed the envelope too far when it comes to pushing envelopes, I'm glad the authorities are still willing to say "Whoa!" to a film every now and then.

Email ThisBlogThis!Share to TwitterShare to FacebookShare to Pinterest
Labels: Koreans in cinema