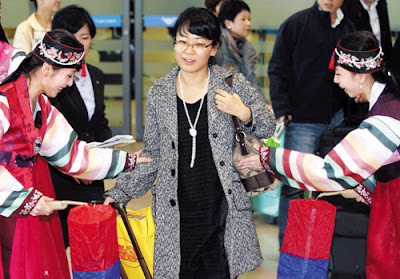 When they said there would be 8 million visitors per year to South Korea by 2010, they laughed in the faces of the Korea National Tourism Organization. Ha ha, they said. Who would ever want to go to Korea?

But lo and behold, Sun Renzhou emerged from a Shanghai-to-Inchon plane and became the eight millionth visitor to South Korea this year. And just in time for all the fireworks: "Welcome to Korea, now go home!"

Ms Sun will receive a round-trip ticket to come back to Korea again, a stay at the Shilla Hotel, and a digital camera to record all her memories.

Frankly, among friends and relatives — non-kyopo and kyopo alike — who have either visited me in Seoul or have gone there after I began my studies in Hawaii, all have had a great time. In Hawaii or California I meet people who have visited Korea and they rave about their trips. There is a lot to do and it's easy to get to, and it can be "more of the same" or a respite from whatever they were seeing or doing in China, Japan, or Hong Kong, if those were also on their itinerary.

Email ThisBlogThis!Share to TwitterShare to FacebookShare to Pinterest
Labels: tourism