Obama arrives in Seoul, but still no new agreement on the KORUS FTA 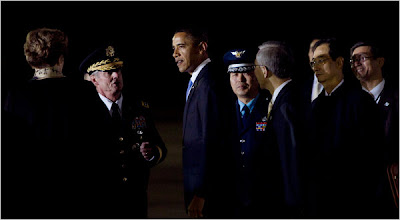 US President Barack Hussein Obama Oh Hanma has arrived in Seoul. South Korean and US trade negotiators had hoped to have finished hammering out mutually acceptable revisions to the already signed FTA (signed by former US President George W. Bush and former ROK President Roh Moohyun) that they could push through their respective national legislatures.

But no such deal has been made, reports the New York Times:

People monitoring the negotiations say that if the deal is sealed, it will be the result of the direct talks between the two leaders. Mr. Obama and Mr. Lee have scheduled a joint news conference for midday Thursday in Seoul. For Mr. Obama — who is trying to reframe his presidency around improving the American economy and who has made the doubling of exports a centerpiece of his agenda — walking away without an agreement could prove to be an embarrassment.

I'm still optimistic, and the truth is I thought it might come to this: A face-to-face meeting being where the compromises are ultimately made. Both presidents want this (for the most part), and it would be good (overall) for both countries.

And when China is making noise about how it's a big country and all its neighbors are less significant smaller countries [HT to Wangkon]...


While the U.S. offer was greeted positively by most of the Association of Southeast Asian Nations (ASEAN), Chinese Foreign Minister Yang Jiechi pointedly suggested that smaller nations are not considered the equal of larger ones, stating, “China is a big country and other countries are small countries, and that’s just a fact.”

... South Korea has got to realize that it needs to work on restrengthening its economic ties with the US (and Japan, Europe, Taiwan, India, etc.).

UPDATE:
The Los Angeles Times is reporting on the press conference between Obama and Lee, suggesting that the chance to work out a face-to-face deal between the two leaders is gone, though Obama says he is hoping for an agreement within the next few weeks. Cows and cars are the holdups once again, apparently. I wonder if the Republican leadership could just pass it through the House come January, and then try doing the same in the Senate as soon as they get three or four Democratic senators on board (three would require a Senate tiebreaker by Vice President Biden). 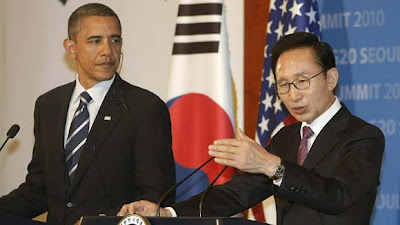