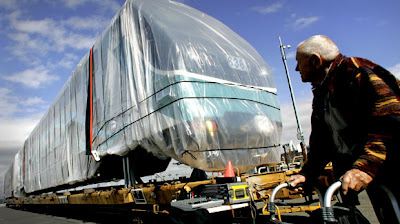 In a follow-up from this December 2009 story, the Los Angeles Times is reporting that the L.A. area's commuter railroad is buying twenty more Hyundai Rotem Co. coaches, touted as providing "first-in-the-nation" safety technology, which will make up 137 of 160 passenger cars:


Bolstering the effort to improve safety at Metrolink, directors of the commuter railroad on Friday agreed to buy 20 more state-of-the-art train cars that can better protect passengers and crews during a crash.

The board of the Southern California Regional Rail Authority pushed aside financial pressures and unanimously voted to exercise an option to buy the cars made by the South Korean Hyundai Rotem Co. for $1.68 million each, about $1 million below the market value.

Rotem cars have energy-absorbing crush zones and other safety improvements now required by the federal government — measures that Metrolink has sought since a deadly crash on the border of Glendale and Los Angeles five years ago that killed 11.

While I'm happy to see South Korea becoming a go-to place for highly safe high-tech, it bothers me that the United States finds it so difficult to make things like this. Could be Americans' general aversion to public transport having led to a profound lack of a demand and thus little opportunity for such an industry.