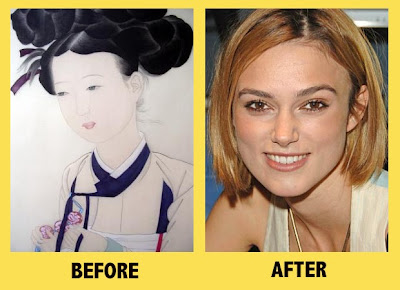 Yep, Reuters is carrying on the meme (meme #77) with an article about how prevalent plastic surgery is in South Korea:

A number of plastic surgery hospitals have taken advantage of a recent trend by some parents to reward their children for years of hard study with plastic surgery, offering substantial discounts for eye and nose operations.

Popular surgeries include "Westernising" the nose to give it an upward tilt and double-eyelid surgery to make eyes look bigger, which is especially popular with young women.

"We already had a long reservation list with names of students even before they took the test," the manager of one hospital told the JoongAng Daily.

At that hospital, the two surgeries -- one for the eyes and one for the nose -- would normally go for 3.7 million won ($3,273) if done separately. The special package, though, offers a discount of 900,000 won for those having both.

Another hospital took a different tack, aiming at the students' long-suffering mothers, who offer food and support through the hard years of study and worry along with their offspring until the dreaded tests are past.

"If a student has two plastic surgeries for eyes and nose at the same time, we will provide a free Botox shot for the mother's wrinkles," it said in an advertisement on its website, the JoongAng Daily said.

Call it the Koreanization of Western journalism, but there are a few bits of irresponsible reportage in this article. For starters, who is saying "Westernising" such that it's in quotes. Oh, it's "scare quotes" so we can pretend someone said it some time ago, and even though we don't analyze it, it seems to be full of truthiness, so let's run with it.

But more to the point, just how many of these nose jobs are actually performed, by these chop shops in the article that are offering the special deals (and that may or may not be characteristic of plastic surgery outfits throughout the country)? The article doesn't say, but instead leaves us with the impression that it's somewhat common.

And that, kiddies, is my point. The eyelid surgery is commonplace, much more than other forms of plastic surgery. And while it does have the "plastic surgery" label slapped on it, it's a relatively minor procedure and it is (for better or worse) normative. A lot like, wait for it... getting braces in America, which is also done primarily for cosmetic purposes, costs thousands of dollars, and frequently requires invasive oral surgery (it did in my case).

But explaining that would make the whole thing seem, well, less shocking... less weird. And we couldn't have that.