Obama gets a Korean name 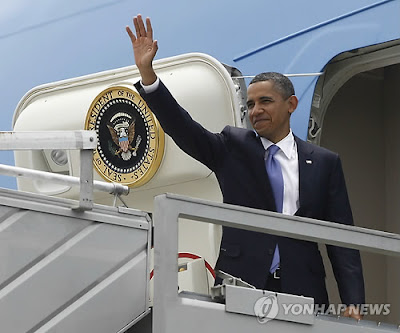 Apparently the best way to counter the ravages of globalization is by Koreanizing everything, including visiting heads of state. Henceforth, Obama shall be Oh Hanma.


A pro-U.S. organization named the Korea-U.S. Alliance Friendship Society said Wednesday it would confer the Korean name "Oh Han-ma" on the U.S. president on the occasion of his visit to South Korea.

"It is our sincere hope that the conferment of the Korean name to U.S. President Barack Obama will further solidify the alliance with South Korea, forged by blood during the Korean War," said Suh Jin-sup, head of the Seoul-based society, in a statement.

The family name "Oh," meaning a country in Chinese character, is derived from the Korean pronunciation of the letter "O" in the name "Obama," Suh said. The name "Han-ma" is a combination of two Chinese characters with "Han" meaning Korea and "Ma" standing for horse, which Sun says is a symbol of the U.S.

Put together, the Korean name for Obama reflects hope that leaders of South Korea and the U.S. will make major efforts "by running at full speed like a horse" to try and rescue the world economy from the worst crisis in decades, according to Suh's explanation.

While I appreciate the way KorAm Friendship Society is trying help the president with their rendering of Obama, they should realize it's the Hussein name that's been giving BHO all that trouble.

Anyway, Oh Hanma doesn't sound so bad. I'm just glad they didn't go for something more homophonous and call him Oh Banma, which would make him half-horse.