Bullsh¡t Revisited:
A year later, a "curious" post about ATEK and the infamous "death threat"

This morning someone named "dose" left a comment on my post about the G20 forum not reaching much consensus. His comment was not about the G20 but about ATEK, the Association of Teachers of English in Korea. He asked if I knew ATEK and he provided a link to a post that made some pointed accusations about the once-controversial organization and its former leadership.

[UPDATE: That entire blog, which consisted of just that one post, seems to have been removed just a few hours after me reporting about it; I did save it as an identifiable webarchive, however, for anyone who would like to see it.]

I'm reprinting the letter (in the same JPG form in which it's posted at the original site), though this does not indicate endorsement for its contents (which include some borderline racist and misogynist comments, along with possibly hurtful comments about people I have no reason to suspect are bad people). Click to enlarge: 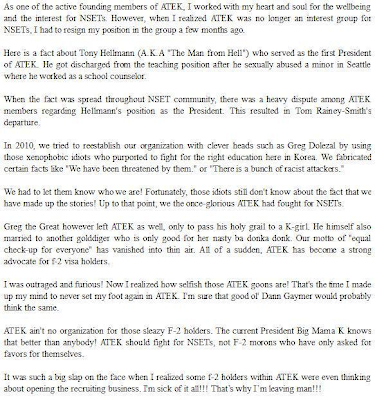 Well, I told "dose," I had referred to APEC, not ATEK, but yes, I am quite familiar with this teachers' organization. In fact, I'm well aware of the accusations about Tony Hellmann mentioned above, and at one point some people were accusing me of being behind them (see the comments here; Tony Hellmann, with whom I corresponded by email about this, was kind enough to step in and say he had no reason to believe I was involved in any way.)

What's more noteworthy to me about the "curious" post is that its author, who claims to have been a "founding member" of ATEK, clearly accuses ATEK itself of having engineered the infamous "ATEK death threat" that was the hot topic in the anglophone K-blogosphere one year ago. If you're not familiar with this story, go read about it here and here.

Here's the gist of the threat from the Korea Herald:


"I have organized the KEK (Kill White in Korea). This group of people is about 200 in anywhere in Korea," the e-mail read. "We will gonna start to kill and hit White (expletives) english spectrum from this Chirstmas. Don`t make a fuss in there, just get out."

From the get-go, I have gone on record questioning whether the death threat against English teachers was legitimate (see here, here, here, here, here, and here), though I did specifically say I did not think it was from any of the ATEK leadership. Other bloggers had also expressed their skepticism.

Nevertheless, depsite all the doubts, ATEK associates went overboard to publicize this threat, couching it as an indictment of Korean racism and bigotry aimed at them. They and their associates even went on Canadian national radio to tell about the death threat (you can listen here).

So now this post by "curious," dated just yesterday and presented as a JPG file so that it can't be cataloged in Google searches, is coming out and saying that the death threat was "fabricated" and ATEK "made up the stories." Quite a shocker, if it's true.

In fact, as I pursued this last year and earlier this year, I was eventually told privately by two people associated with the case that the email was sent from the United States, but I never went public with this information, since I was hoping to see more substantial evidence that would allow us to skewer the case.

Now that this "curious" post is out there (and I have no idea whatsoever who "curious" or "dose" is), I wonder if we should revisit the whole thing. I still firmly believe that no AES member, and probably no native Korean, sent the death threat. I still hold out the possibility that it was sent by a rogue ATEK member or some sh¡t-stirrer in the anglophone K-blogosphere without ATEK leadership's knowledge. But if these accusations are true, this is some serious sh¡t.

That would mean the law was broken with false reporting of a hate crime. A hoax was perpetuated in the national media of several countries — particularly the ROK, Canada, and the US — and trust may have irreparably been broken. Those involved would owe a lot of people some major apologies: the English-teaching community they would have been trying to frighten, AES which they would have falsely accused of attempted murder, the larger Korean society that was indicted for promoting such violent hatred, etc.

God, do I ever hope it wasn't ATEK leadership. Or at the very least, I hope (if true) it was past ATEK leadership so that the present organization can come clean, put this behind us, and move on. It is now full of people like Roboseyo who I could never imagine capable of involvement in such caustic nonsense, folks who realize mistakes were made in the past and are trying to move forward with that knowledge.