Ha! I'll bet you think I'm making that up. 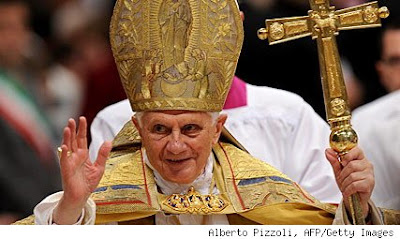 
The pope's remarks on condoms were among the most controversial in the excerpts printed by the Vatican daily, "L'Osservatore Romano," on Saturday, and drew the most interest.

"There may be a basis in the case of some individuals, as perhaps when a male prostitute uses a condom, where this can be a first step in the direction of a moralization, a first assumption of responsibility," the pontiff said. (Because prostitute is a masculine noun in German, it was also unclear whether Benedict meant a male sex worker. In the Italian version of the book the noun is feminine.)

Oh, great, now I have a joke version of a David Lee Roth song in my head: They're just for gigolos, ...