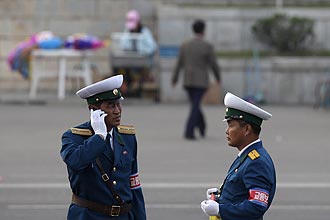 The Straits Times is reporting that the Egyptian mobile carrier Orascom has said cell phone subscriptions in North Korea have quadrupled:


Mobile phone subscriptions have more than quadrupled in North Korea in 12 months, the operator said, as a growing number of youths in the reclusive communist state clamour for wireless telecom.

Cairo-based Orascom Telecom Holding said in its third quarter earnings report that the number of subscribers in the country had jumped to 301,199 by the end of September from 69,261 a year earlier.

'Koryolink continued the utilisation of its 3G network and successfully launched the video calling service to the market which resulted in a high level of demand, especially from the youth segment,' it said on its website on Sunday.

More and more youth driving the mobile phone craze? Um, is this North Korea? Seriously, this is weird, but a good sign, as the more people there are with cell phones the harder (and more resource-consuming) it is for the ruling apparatus to keep tabs on them all. And here's hoping that Kim Jong-il and Jang Songthaek get carpal tunnel syndrome.

Joshua at One Free Korea had a post on this back in June 2009, where Orascom said they hoped to hit 100,000 subscriptions by the end of that year.

And of course, no post on North Korea's cellular service would be complete without me linking to this handy-dandy guide to North Korean emoticons.