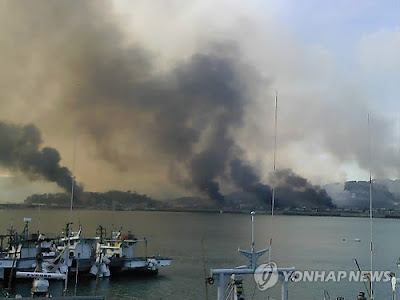 This has just left me... Whiskey tango fu¢k!

The North's artillery shells started falling in the South's waters off the island of Yeonpyeong from around 2:34 p.m., some of them landing directly on the island, said Col. Lee Bung-woo, spokesman for the South's Joint Chiefs of Staff (JCS). The South's military fired back some 80 rounds, he said.

The military is on its highest peacetime alert, he said. The Air Force has deployed fighter jets to the island.

One marine was critically wounded and three others sustained minor injuries, according to Lee. It was not immediately known whether there were civilian casualties. TV footage showed plumes of smoke rising from the island. Island residents said people are being told to evacuate. Officials said the North's shelling was intermittently continuing and that the South was also responding with return fire.

The presidential office Cheong Wa Dae said it was looking into the possibility that the North's firing was in protest to an ongoing South Korean military drill on the western coast. The "Hoguk Exercise," one of South Korea's three major annual defense exercises, began Monday with some 70,000 troops participating.

The North had sent a message to Seoul denouncing the exercise earlier in the day, Cheong Wa Dae said.

The president convened an emergency meeting of security ministers and instructed the government to ensure that the situation is contained.

The news may deal a blow (temporarily at least) to the economy. From the WSJ Marketwatch:


The news sent the Korean won falling against the U.S. dollar in forward trade, with the greenback rising to 1,155 won compared to Tuesday's spot close of 1,137 won, according to Dow Jones Newswires. [HT to Simpsons-l friend Marc]

I really don't know what to say. I hope and pray no civilians were killed, but even if casualties are limited, this can't be considered anything but an act of war. Yŏnpyŏng-do [listed as Yeongpyeong Island in the map below] is not disputed territory, nor are the waters immediately around it (even if the NLL is itself declared illegitimate by the North). 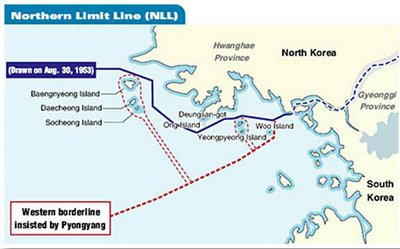 We all talked about what South Korea should do if North Korea again pulled something like the Ch'ŏnan sinking, but this is it, especially if people died.

Part of me says, at least just go all out and completely take out the positions that are firing on ROK territory. But for now, I'm guessing it's prudent to go no further; it's entirely possible that a strong military attack on DPRK positions is exactly what the North is trying to engineer. Still, gotta do something or else this will keep happening again and again.

UPDATE:
Robert at The Marmot's Hole is staying on top of this. AP (via WaPo) also has the story. The Wall Street Journal is reporting that a ROK Marine has died. More links at the Los Angeles Times, the New York Times, CNN, and Reuters.

The BBC has some more information:


A resident on the island told the agency that dozens of houses were damaged, while television pictures reportedly showed plumes of smoke rising above the island.

"Houses and mountains are on fire and people are evacuating. You can't see very well because of plumes of smoke," a witness on the island told YTN television station.

"People are frightened to death and shelling continues as we speak," the witness said.

The 1200 residents of Yŏnpyŏng-do, as well as those on Paengnyŏngdo and the other South Korean islands that skirt North Korea's southwestern coast, have always known they were in a danger zone (as is anyone who lives so close to the DMZ), but that's no justification for attacking civilians.