Will uniting a divided peninsula be the key to South Korea's 2022 World Cup bid? 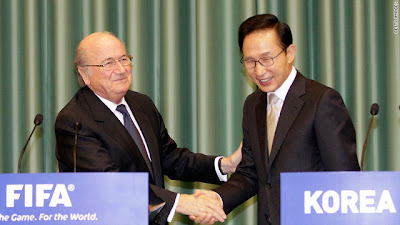 The head of FIFA seems to be giving that kind of indication.


FIFA president Sepp Blatter praised South Korea's bid to host the 2022 World Cup on Monday and said that the sport had the power to unite the divided northern and southern halves of the country.

The hosts for the 2018 and 2022 World Cups will be announced by FIFA on 2 December, with Australia, Japan, Qatar and the U.S. also competing to host the 2022 competition.

"There is no doubt that Korea should be ready to organize a good World Cup," Blatter told reporters at a joint press conference with South Korean president Lee Myung-Bak in the capital Seoul, after being awarded the country's Order of Merit for Sports.

"Football is more than a game, as it has a socio-cultural impact and can therefore connect people all over the world."

I realize this is FIFA and not the IOC, but some might warn that weepy appeals to unification don't make for an effective hosting bid.

But I'm not one of them. This is, after all, the same FIFA that awarded Japan and Korea the co-hosting rights, in a groundbreaking effort aimed at building bridges between the two East Asian rivals.

Clearly South Korea has the infrastructure for another World Cup, and Pyongyang already has a stadium or two. What I think is a more interesting discussion is what North Korea might look like in twelve years.

Will KJI still be alive (don't count that out just yet) but barely holding on, his circle of yes-men fulfilling his every demented command (e.g., Wipe out that village, it looks ugly on Google Earth! A rubber chicken in every pot! I don't care if she's my granddaughter)?

Will Kim Jong-un be nominally in charge but controlled behind the scenes? Will KJU have marshaled the same level of support as his Marshal father? Will the regime have collapsed and we're looking at a confederation on the peninsula?

Will North Korea have successfully begun implementing Chinese-style reforms and it's well on its way to being integrated not just with Northeast China but with Northeast Asia as a whole?

Will North Korea be using the threat of pulling out of the World Cup hosting and/or embarrassing South Korea in some other way, in an effort to squeeze the latest concessions out of Seoul?