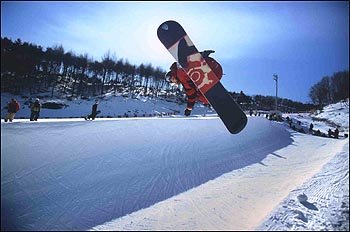 The former governor of Kangwon-do Province, who oversaw P'yŏngch'ang County (aka Pyeongchang) get oh-so-close to hosting the 2010 Winter Olympics and then the 2014 games, has been brought back as an ambassador of sorts for the 2018 bid.

From AP, via USA Today:


Kim Jin-sun is the former governor of Gangwon province who led the unsuccessful bids for the 2010 and 2014 Winter Games. He was appointed by the South Korean government Tuesday as an "ambassador" to the 2018 committee.

Pyeongchang is competing against Annecy, France, and Munich. The IOC will select the host city in July.

I think our chances are good. Pyongchang had snow this year when Vancouver lacked it (one of the worries about the Pyongchang bid, we were told), and in the meantime South Korea has been working hard on putting in the railway infrastructure that would make getting out to its venue a breeze, whether or not the games ever get there.

Okay, okay. I have to stop paying so much attention to this or I'll jinx the bid again.