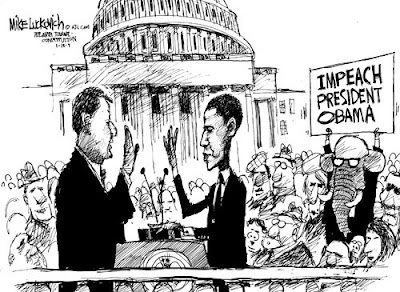 Though they think it's a long shot, some in the Tea Party movement seem to be taking the idea seriously:


The impeachment is much like an indictment. It alleges what the President has done wrong. The matter then goes to the Senate where it takes a two-thirds majority to remove the President.

The common wisdom is that is impossible because not only to the Republicans not have two thirds, but also the Democrats actually control the Senate.

The conventional wisdom may be wrong.

An amazing editorial appeared in the pages of the Washington Post today. Top Democratic operatives Douglas Shoen and Patrick Caddell called on Obama to announce immediately he is not running for reelection in 2012. While Obama would never do that voluntarily, the fact that two top Democratic operatives called for this with two years left in his administration means the Democrats have come to a realization. Obama cannot win 2012.

The idea is that Democrats in the Senate would go for removal of Obama believing that a newly elevated President Joe Biden has a better chance of winning if he then repudiates the Obama agenda.

The Washington Post op-ed cited above, though, is quite interesting, and I had planned to blog about it even before I spotted the Tea Party Nation piece that prompted this post. Here's the gist:


This is a critical moment for the country. From the faltering economy to the burdensome deficit to our foreign policy struggles, America is suffering a widespread sense of crisis and anxiety about the future. Under these circumstances, Obama has the opportunity to seize the high ground and the imagination of the nation once again, and to galvanize the public for the hard decisions that must be made. The only way he can do so, though, is by putting national interests ahead of personal or political ones.

To that end, we believe Obama should announce immediately that he will not be a candidate for reelection in 2012.

If the president goes down the reelection road, we are guaranteed two years of political gridlock at a time when we can ill afford it. But by explicitly saying he will be a one-term president, Obama can deliver on his central campaign promise of 2008, draining the poison from our culture of polarization and ending the resentment and division that have eroded our national identity and common purpose.

Yeah, yeah, except that actually the very act of making good on his statement that he'd "rather be a really good one-term president than a mediocre two-term president,"by declaring he won't run in 2012, he would simply declare himself a lame-duck, embolden the opposition to stonewall further, and his noble sacrifice would be all for naught.

It would appear that these two "pretend Democrats" are not coming to us with as heavy a heart about Obama as they let on. Past editorials of theirs in which, for example, they blame Obama's reaction to racially divisive issues for causing the racially divisive issue in the first place, make clear how they view Obama, and the shellacking this November is just an excuse to up the ante.

In other words, the Tea Party should take care not to take two Fox News analysts as representative of Democrats at large. Or Democrats in Washington. 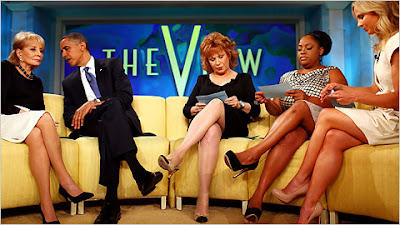 But I say bring it on. In 1998, Clinton's popularity went through the roof when the Republicans decided to impeach him for lying about his sexual dalliance with Monica Lewinsky. Some in the Tea Party apparently believe what many operatives across the political spectrum believe: the American people loathe so-and-so as much as I do. It's why liberals and other Democrats were dumbfounded that Bush43 got a second term or why Clinton's popularity went up.

I don't know how this will play out for Obama, though. But my gut feeling is that it wouldn't be good for the country to find out. And you are more concerned about the country than politics, right?

[NOTE: Except for the photo of President Obama appearing on The View (which gave me an excuse to highlight Elizabeth Hasselbeck's legs), all the artwork here comes from this site, whose owners seem not to have grasped the intent of the political cartoon way up top.]