More nuclear brinksmanship from the masters of brink. 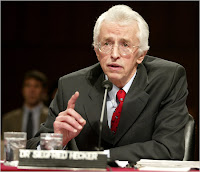 North Korea showed a visiting American nuclear scientist earlier this month a vast new facility it secretly and rapidly built to enrich uranium, confronting the Obama administration with the prospect that the country is preparing to expand its nuclear arsenal or build a far more powerful type of atomic bomb.

Whether the calculated revelation is a negotiating ploy by North Korea or a signal that it plans to accelerate its weapons program even as it goes through a perilous leadership change, it creates a new challenge for President Obama at a moment when his program for gradual, global nuclear disarmament appears imperiled at home and abroad. The administration hurriedly began to brief allies and lawmakers on Friday and Saturday — and braced for an international debate over the repercussions.

The scientist, Siegfried S. Hecker, a Stanford professor who previously directed the Los Alamos National Laboratory, said in an interview that he had been “stunned” by the sophistication of the new plant, where he saw “hundreds and hundreds” of centrifuges that had just been installed in a recently gutted building that had housed an aging fuel fabrication center, and that were operated from what he called “an ultra-modern control room.” The North Koreans claimed 2,000 centrifuges were already installed and running, he said.

An ultra-modern control room in an aging factory that had been gutted? I'm picturing the lair of a James Bond villain.

One wonders if the North Koreans really were able to put together such a facility so secretly and so rapidly (with the ascension of Kim Jong-un as a distraction?), or if Professor Hecker was shown the Ikea Showroom of uranium nuclear plants (i.e., display after display of expensive-looking stuff that is just carefully crafted boxes designed to appear very real but is ultimately nothing more than show).

And since North Korea's on-again, off-again nuclear development is a bit confusing to follow, I'll leave you with this handy-dandy Reuters "factbox" on the subject.