KCNA releases Korean People's Army report on Yŏnpyŏng-do attack:
"There is in the West Sea of Korea only the maritime military demarcation line set by the DPRK"

I think North Korea may have declared a reopening of inter-Korean hostilities but we are not yet grasping that. Note the very last line of the following report.

North Korea has decided that it is going to stop talking about the waters it claims south of the NLL (which it has never controlled except for a brief period when it occupied South Korea) and start turning it into a hot war, perhaps to bolster support for the military at a time when faith in the government is eroding (note that this has nothing to do with The Kim Who Wasn't There). 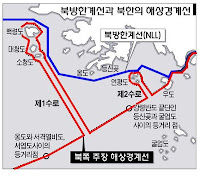 They are declaring that any activity in the area between the blue line (the Northern Limit Line followed since 1953) and the red line (the Maritime Military Demarcation Line they announced in 1999) in the map at right is an intrusion into DPRK territory that will be met with "merciless military counter-actions against it."All of that, I wish to point out, is ROK-controlled and filled with South Korean fishermen.

The Ch'ŏnan and Yŏnpyŏng-do, I fear, were only rounds 1 and 2.

The KCNA, for your ideological edification:

The south Korean puppet group perpetrated such reckless military provocation as firing dozens of shells inside the territorial waters of the DPRK side around Yonphyong Islet in the West Sea of Korea from 13:00 on Nov. 23 despite the repeated warnings of the DPRK while staging the war maneuvers for a war of aggression on it codenamed Hoguk, escalating the tension on the Korean Peninsula.

The above-said military provocation is part of its sinister attempt to defend the brigandish "northern limit line," while frequently infiltrating its naval warships into the territorial waters of the DPRK side under the pretext of "intercepting fishing boats."

The revolutionary armed forces of the DPRK standing guard over the inviolable territorial waters of the country took such decisive military step as reacting to the military provocation of the puppet group with a prompt powerful physical strike.

It is a traditional mode of counter-action of the army of the DPRK to counter the firing of the provocateurs with merciless strikes.

Should the south Korean puppet group dare intrude into the territorial waters of the DPRK even 0.001 mm, the revolutionary armed forces of the DPRK will unhesitatingly continue taking merciless military counter-actions against it.

It should bear in mind the solemn warning of the revolutionary armed forces of the DPRK that they do not make an empty talk.

There is in the West Sea of Korea only the maritime military demarcation line set by the DPRK.

Great. After years and years of buffoonish bluster, now they stop making an empty talk.