Some random items from the KCNA...

North Korea is upset because the Unification Ministry won't return their calls.

In cultural news, North Korea is all about traditional Korean stuff. This includes ramie, known in Korean as moshich'ŏn [모시천]:


Clothes, including national dresses, made of ramie fabric are enjoying increasing popularity in the Democratic People's Republic of Korea.

According to the Chronicles of the Three Kingdoms (Koguryo, Paekje, and Silla) and other old documents, Korea had an advanced technology of weaving ramie cloth and exported it to other countries already in the middle ages.

Ramie cloth, well known as a special product of Korea, is as stiff as starched one and makes people feel cool.

It is used with and without bleach.

The durable and fadeproof cloth is not easily wet with sweat, so it has been taken for summer dresses from old times.

The production of ramie cloth is based on modern technologies in the country.

The Korean-language article is here. For reference, The Chronicles of the Three Kingdoms is Samguk Sagi, an ancient historical work.

I'm glad that the KCNA puts out stories like this; it reinforces a shared history (and relatively free of propaganda) that can serve as a bridge when/if reunification eventually occurs. 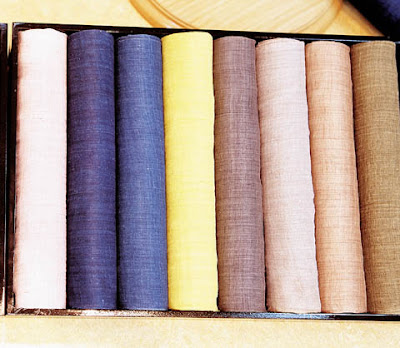 Frankly, though, while I find some of the clothing made with ramie aesthetically pleasing, when I've had to wear the stuff, I found it itchy. But that's me; I'm very picky about certain types of cotton towel as well. Here's the same article in Korean.

Meanwhile, there was a preview of a movie on the Juche spirit, Lovely Sunshine. The KCNA mentioned Kim Jong-il twice:


The film impressively represents the noble ideological and moral world of servicemen's families who set an example in mass culture and arts, bearing in mind such profound trust shown by leader Kim Jong Il as putting forward them as women revolutionaries and the second bugler in the era of Songun.

The film tells stories that art works rich in ideological contents and high in artistry are being produced and truthful acting is presented thanks to such intense loyalty of officers' wives as firmly believing and following Kim Jong Il only, a striking proof of the vitality of the contest among the art groups of servicepersons' families, a product of the era of Songun.

What was notably absent from the KCNA report? Kim Jong-un.

Email ThisBlogThis!Share to TwitterShare to FacebookShare to Pinterest
Labels: KCNA, Kim Jong-il, Kim Jong-un, The Kim Who Wasn't There™