That was the headline probably carried by both Faux News and NewsMask.com regarding the story of one Pedro Ramirez, the president (of the Fresno State University student body) who admitted that he's an illegal alien.

Mr Ramirez, whose family brought him to California when he was three years old, pays in-state tuition, which is the law of the land in California (and upheld by the State Supreme Court, which I have no problem with). 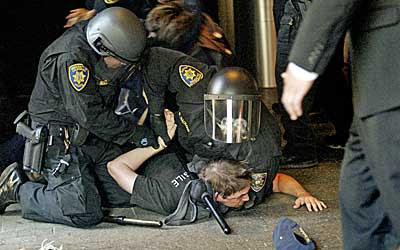 Oh, and speaking of tuition, while it's hard for University of California to get riled up for Vietnam War Era-style protests against the Iraq War or whatever, they will go postal over tuition increases:


UC San Francisco Police Chief Pamela Roskowski said the confrontation was potentially dangerous and defended the use of pepper spray against about 15 demonstrators. She also confirmed that one UC officer had drawn his service revolver when he was rushed by a crowd of demonstrators, one of whom grabbed the officer’s baton and hit him with it, she said. That officer and one other were slightly injured in the incidents. No shots were fired.

Nice. I used to be fond of calling such things the "Koreanization of America." Get the tear gas. 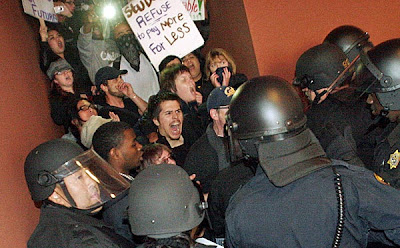