Far East Movement (whose initials would be FEM but they prefer to call themselves FM) made history recently by cracking Billboard's "Top 10" with their third album, "Free Wired," which includes "Like a G6."

I hate that song. It's one of those emptily derivative offerings that, if you are unfortunate enough to catch it on the radio, will be playing and replaying over and over and over again in your head while you're supposed to be reading about the effin' effects of education on positive medical outcomes and the so-called Latino Paradox whereby Hispanic immigrants to the US live longer than those born in America.

Mind you, this is hours or even days after having heard the song. The only good reason to even see the video is this: 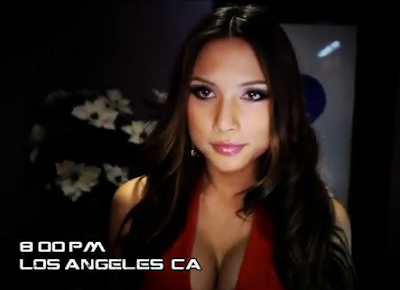 But truth is, I can't lust after this woman too much because, as I made clear in the "CSI: Koreatown" post, Korean women who get boob jobs are best left alone:


You see from other parts of the show that the young Korean mother (murder victim #2) is sort of hot. Thin—maybe too thin for someone who has had a kid—and crazy nutso. But hot. Though she's lying on her back, you can see her breasts are still standing at attention, which is nearly a sure bet that they're mercenaries. The moral of this episode is simple: never trust a Korean-born woman who gets a boob job. They're nuts. I'm not kidding. Certifiable. If you don't like 'em small and natural, move along, brother. Move along.

But this post is not actually about my proclivities (hey, I've got small hands, what can I say?), not even about FEM, but about the history they are now apart of, so sayeth the Los Angeles Times. They start with the meaning of FM's success:


Prior to FM, the last group of Asian Pacific Islander descent to run the dance floor might have been the Jets, the Tongan-German, Minneapolis-based family band that had a string of dance/R&B hits, including “Curiosity” and “Crush on You.” That was back in 1985.

When I began writing about Asian American artists in the early 1990s, the common hope was for a “breakthrough” superstar that could pry open the gates of the record industry by convincing skeptical label execs that “we” were marketable. Yet although the sales of "Free Wired" could be the result of a trickle-down effect from other Asian American artists, it's more probable that FM’s success is the culmination of a long-term movement to part the doors of opportunity with a thousand nudges rather than a single magic bullet.

And some of that long-term effort is rather interesting:


Behind FM’s climb to the top are at least two intersecting histories of “Asian American music” (an ill-defined term, but bear with). One history begins in the early 1970s, at the very birth of the idea of “Asian America” as a social and political term unifying disparate ethnic groups. (FM, a group whose members are of Chinese, Filipino, Korean and Japanese descent, practically stand in as a poster child for pan-ethnic Asian America). Besides rallies and newsletters, activists used music to promote this nascent, umbrella identity.

For example, arguably the first album by a self-identified Asian American group was the 1973 eponymous debut of the folk trio A Grain of Sand. In line with the political source of their creative inspirations, their songs tackled cross-ethnic unity, labor solidarity and antiwar sentiments. A lost history lies behind these groups and their now-obscure releases, be it the eclectic, jazz/spoken word stylings of the Bay Area band Yokohama, California, or “The Ballad of Chol-Soo Lee,” a 1978 single released in San Francisco to raise awareness about the case of a Korean immigrant wrongly convicted of murder. By the time my generation came of age, the musical vehicle for social and cultural outreach shifted from that of folk and jazz to hip-hop. In the first half of the 1990s, a wave of politically charged collegiate rap artists came and went, including UC Davis’ Asiatic Apostles and Rutgers University’s Yellow Peril.

Most of these groups followed the Funkadelic principle of freeing minds and hoping butts would follow, but on an album like "Free Wired," with its catchy club anthems such as “Girls on the Dancefloor” and “Like a G6,” FM has gone the other way: butts first, minds maybe. Yet the group certainly walked the same path as many of those now-forgotten, Asian American rap pioneers.

Translation of that last line: Sellouts. But the multicultural assortment of women in the video are cute.

Email ThisBlogThis!Share to TwitterShare to FacebookShare to Pinterest
Labels: kyopo, music, some kyopo are evil