The US and South Korea have kicked off joint naval exercises around Yŏnpyŏng-do [Yeonpyeong], the island whose recent shelling by North Korea killed two marines and two civilians and has put everyone on edge.

The announcement of the naval drills has itself raised tension. North Korea has called the exercises a provocation (but they call everything a provocation) and has threatened further attacks as a result. Meanwhile China has warned the US and South Korea to stay out of its EEZ (exclusive economic zone).

There's actually nothing wrong with US or South Korean naval vessels entering the Chinese EEZ, as long as they don't pitch fishing poles off the side and then try to sell what they catch. Since they'll be watching out for North Korean rockets, shells, and torpedoes, I doubt they'll be doing any angling. So screw 'em. 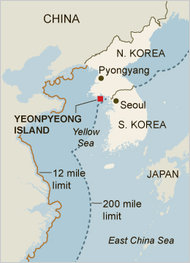 Actually, I'm a little baffled as to what the New York Times is getting at with their map. They show a 200-mile limit projected from the Chinese shore as if other nearby countries don't have their own EEZ.

Where two countries' projected EEZ overlaps, they must work out an agreement over who has economic control over what waters, but this typically follows the principle of equidistance, so South Korea's 200-mile limit would push against China's.

Indeed, the agreement of economically exclusive and economically shared waters is a bit more complex than the NYT lets on, and South Korea certainly has control over more than their map suggests. 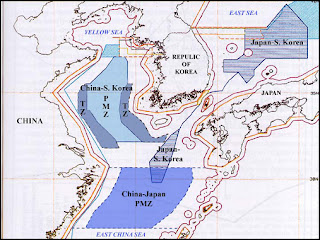 PMZ means "provisional measures zone," while TZ means "transitional zone." At some point the TZs are supposed to turn into EEZs (or something like that), but I'm not sure if they have yet. At any rate, Chinese "control" is not as great as the NYT map suggests. [On an unrelated note, in the East Sea (Sea of Japan), Japan and South Korea have a shared zone based on an EEZ generated not from Tokto (which is technically not considered a habitable island, even though it houses people all year round) but from nearby Ullŭng-do.]

Oh, and I do know that a brigade refers to an Army subdivision, not a Navy one. But there aren't any naval terms that would have made for a bad pun.