North Korea threatens more attacks... At what point do we consider ourselves at war?

The Marmot's Hole has a post focusing on how North Korea's attack on Yŏnpyŏng-do Island [Yeonpyeong] appears to have been premeditated (i.e., not the nervous response to South Korean military exercises that Pyongyang has made it out to be), evidenced by the type of weaponry they rained down on the island:


So, it appears the North Korean hit Yeonpyeong-do with slightly more than their coastal guns. They hit it with 120mm rockets fired from multiple rocket launchers. And according to lawmaker/military expert Song Young-sun (recently interviewed by the LAT’s John Glionna), the North also employed recently developed thermobaric warheads. The 122mm rockets have eight times the destructive power of North Korea’s coastal guns, and the thermobaric warheads are a special munition that penetrates concrete and kills with high heat and pressure.

Lawmakers showed off the remains of one of 120mm rockets, which landed in the backyard of a post office.

One lawmaker noted that 120mm rocket launchers are not normally deployed to the area from which Tuesday’s attack was launched, which means they were probably moved there from units further in the rear. This leads credence to the belief the attack was carefully planned in advance. The use of the rockets and thermobaric charges also show that North Korea was aiming for lots of damage and lots of dead bodies.

Missiles... fired at post offices... just what kind of imagery are you waiting for?

Well, if that's not enough to get you to sit up and reconsider turning the other cheek, how about this? North Korea seems to be shedding any plausible deniability that it was the aggressor and is now warning of further attacks:


The drama within Lee's Cabinet [involving the resignation of the Defense Minister] ended a tense day that saw North Korea warn of a possible reprise of its attack and Beijing voice concern over joint U.S.-South Korean naval exercises set to begin Sunday. If further provoked, North Korea "will deal without hesitation the second and third strong physical retaliatory blow," read a statement carried by the state-run Korean Central News Agency.

As I noted at The Western Confucian, North Korean rhetoric considers a wide range of legitimate state activities (from patrolling its own borders on down to adopting the KORUS FTA) as "provocation." By merely existing, South Korea is provoking the North. Going about its day is even more provocative. 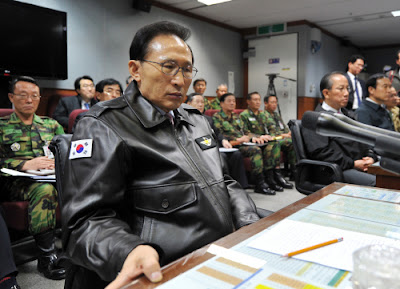 As I have noted repeatedly, the big game-changer with the Yŏnpyŏng-do attack is that it underscores how taking the high road and avoiding military retaliation in cases like the sinking of the Ch'ŏnan does not prevent future attack. If what the LAT is reporting is true, Pyongyang is threatening future attacks (plural!) on the flimsiest of excuses. [And I will be poring over KCNA reports to find this particular news release. UPDATE: Here it is.]

What does this mean for Seoul? At the very least, it means something akin to The Kushibo Plan needs to be implemented or ready to be implemented (option #1 at minimum). As the days pass, the justification for anything other than option #1 slips away, and after more than a week or so, even option #1 must prudently be taken off the table. But South Korea must have in reserve the plan and the will to act on an appropriate version of options #1 and #2 (and possibly #3) if North Korea launches a further attack. Merely lobbing half the number of shells with which you were attacked is too weak a response to be a deterrent for such acts in the future.

In the meantime, while waiting and preparing for the next attack and praying it doesn't actually happen, Seoul (and its allies) need to adopt a stern and meaningful non-military response, one that provides punishment to China for not keeping its pet on a leash and starts directing Korean investment toward countries other than China (e.g., India, Vietnam, the Philippines, etc.).


Prime Minister Naoto Kan and his Seoul counterpart, Lee Myung Bak, agreed Wednesday their countries and the United States must work closely to confront any provocations by North Korea, which the previous day shelled a South Korean island in the Yellow Sea, causing four confirmed deaths.

No one wants war. Just about everyone worries that North Korea will take any reaction by South Korea as an excuse to attack civilian targets that are bigger, more significant, or closer to the capital. But at some point we have to recognize that Pyongyang is going to keep pushing the envelope until we put a stop to it.