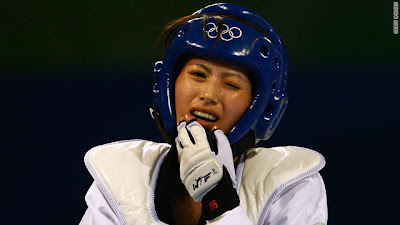 Taiwanese fans are up in arms over the disqualification of Ms Yang Shuchun [above], and some of them are getting quite nasty, according to CNN:


Taiwan has rallied behind a taekwondo athlete who was controversially disqualified at the Asian Games in China, setting up Internet support groups and even burning South Korean flags.

The island's ruling administration was also criticized for its response to the incident, which saw Yang Shu-chun disqualified while leading during a match in the women's 49-kilogram category in Guangzhou on Tuesday.

The Asian Taekwondo Union released a statement accusing gold-medal hopeful Yang of a "shocking act of deception," claiming that she had illegally added two extra sensors to the heel of her socks to help score more points.

The ATU rejected an appeal from the Taiwan team and subsequently banned Yang and the two coaches involved pending a hearing by the martial art's world ruling body.

They also smashed imported products on the floor before police intervened, the newspaper said.

More seriously, while I feel bad for Ms Yang or any athlete who works so hard to make it to the big show only to be disqualified over something stupid (controversial or not), I encourage you to go the Zen route of Kim Dongsung, the South Korean Olympian who lost his gold to Apolo Ohno after a controversial call.

Oh, and message to Taiwan: All your taekwondo are belong to us.

UPDATE:
The Marmot's Hole has an interesting post on the same subject. I predict the comments section will be full of dispassionate analysis of the merits of the disqualification and nothing else.