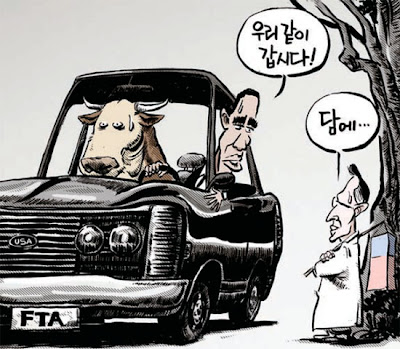 If ever there was a reason to support the KORUS FTA, it's that the KCNA has come out against it:


17 civic and social organizations of south Korea including the South Headquarters of the Pan-national Alliance for Korea's Reunification, the Solidarity for Implementing the South-North Joint Declaration and the (south) Korean Confederation of Trade Unions held the 134th movement for independent reunification and peace in Seoul on Nov. 9 denouncing the U.S. for its outrageous action to force south Korea to yield to it.

The organizations accused the U.S. of pressuring the south Korean authorities to lift the restrictions on the import of beef infected with mad cow disease, ease quarantine regulations, etc. at the additional negotiations for the conclusion of the FTA.

Noting that the south Korean people will no longer tolerate all sorts of humiliation and sacrifices to be imposed by the U.S. upon them, they declared that they would never allow the U.S. hegemonic action to put the south Korean economic arteries under a tighter control through the conclusion of the FTA.

They urged the U.S. to stop its moves to conclude the unequal and humiliating FTA.

Yep, and this is where the chinboista groups get their marching orders.