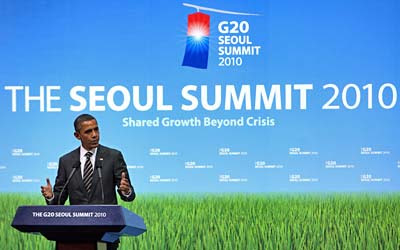 It doesn't sound good, though I don't think anyone's blaming Korea for it:


The leaders of the world's 20 major economies on Friday ended a frequently rancorous two-day summit in this Northeast Asian capital without reaching agreement on specific steps to avert damaging currency and trade wars.

There were far more setbacks than gains, but President Obama suffered the biggest disappointment, falling short in his attempt to forge a unified approach to boosting the global economy.

In one blow, G-20 members refused to endorse a U.S. effort to force China to raise the value of its currency, prolonging a bitter dispute that many say could eventually lead to a global trade war. Before world leaders left the city, they issued a watered-down statement agreeing merely to refrain from "competitive devaluation" of currencies.

The previous day, the U.S. and South Korea acknowledged that they remained in a stalemate over a free-trade agreement that has languished in the national legislatures of both nations.

President Obama, fresh from a trip to India where he said this major rival of China should get a permanent seat on the UN Security Council, was picking a fight with Beijing over their currency devaluation and trying to get the other eighteen participants to choose a side.

Meanwhile, his "shellacking" in the midterm elections reportedly means he has lost a lot of leverage when it comes to things like renegotiating free-trade agreements.

And by the way, where are the everyone-wearing-hanbok pics? Oh, wait. That's APEC.