In the Los Angeles Times, John Glionna and Ethan Kim write about Yŏnpyŏng-do Island's [Yeonpyeong] history as a hot spot:

For half a century, the two sides have skirmished repeatedly over the archipelago, a tug of war that includes everything from sovereignty to the local catch of blue Kumori crab prized by both sides. In 1999 and 2002, the rivals' navies clashed near Yeonpyeong, resulting in numerous casualties.

Well, right there there's a mistake. Several islands nearer to the ROK mainland are close enough to North Korea that you could swim (if you were so inclined). I believe Kanghwa-do [Ganghwa] is the closest, and Kyodong-do [Gyodong] just to the west of that is also practically on top of North Korean territory. 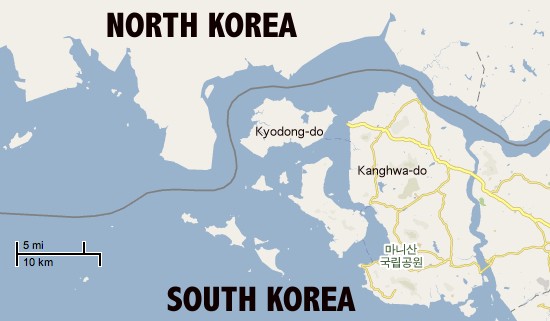 'Bo knows geography (and 'Bo and his future ex-fiancée, in the days before GPS, nearly drove right into a ROK military guard on the northern side of Kanghwa-do one night). 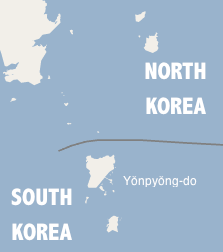 But that's not my main beef. It would appear that the LAT reporters and the former US Ambassador to South Korea got it wrong on North Korea's claim to Yŏnpyŏng-do:


The bone of contention is the so-called Northern Limit Line, an invisible boundary established by the United Nations at the cessation of the Korean War.

But North Korea has long rejected that decision, claiming that the maritime border exists farther to the south. Yeonpyeong Island, Pyongyang insists, is part of its territory. A newscaster in North Korea this week again made that point, calling the attack a tactic to protect its island from the south.

"The island is a hot spot -- both sides claim it," said Donald Gregg, a former U.S. ambassador to Seoul in the George W. Bush administration. "That whole area of the western sea boundary has been very difficult. It's a tough stretch of water, and Yeonpyeong sits right in the middle of it."

Insofar as the DPRK proclaims all of ROK-held territory as its own, it also claims Yŏnpyŏng-do. But as far as the 1953 Korean War Armistice Agreement is concerned, that island is firmly in South Korea's hands:


(b) Within ten (10) days after this armistice agreement becomes effective, withdraw all of their military forces, supplies, and equipment from the rear and the coastal islands and waters of Korea of the other side. If such military forces are not withdrawn within the stated time limit, and there is no mutually agreed and valid reason for the delay, the other side shall have the right to take any action which it deems necessary for the maintenance of security and order. The term "coastal islands", as used above, refers to those islands, which, though occupied by one side at the time when this armistice agreement becomes effective, were controlled by the other side on 24 June 1950; provided, however, that all the islands lying to the north and west of the provincial boundary line between HWANGHAE-DO and KYONGGI-DO shall be under the military control of the Supreme Commander of the Korean People's Army and the Commander of the Chinese People's volunteers, except the island groups of PAENGYONG-DO (37 58' N, 124 40' E), TAECHONG-DO (37 50' N, 124 42' E), SOCHONG-DO (37 46' N, 124 46' E), YONPYONG-DO (37 38' N, 125 40' E), and U-DO (37 36'N, 125 58' E), which shall remain under the military control of the Commander-in-Chief, United Nations Command. All the island on the west coast of Korea lying south of the above-mentioned boundary line shall remain under the military control of the Commander-in-Chief, United Nations Command. (See Map 3).

The emphasis, of course, is mine. I wonder if Messieurs Glionna and Kim did not discover this bit of evidence because the "new" Revised Romanization system spells the island in question entirely different from the (much better IMnsHO) McCune-Reischauer-based spelling that prevailed in the past.

In other words, North Korea and China both signed an agreement recognizing Yŏnpyŏng-do as South Korea-controlled territory. They have no legitimate claim to taking it back. None. Zero. Nada. South Korea's ownership is obvious, also, even in maps of the maritime border proposed by North Korea, which rejects the NLL that has formed the de facto border since the war. 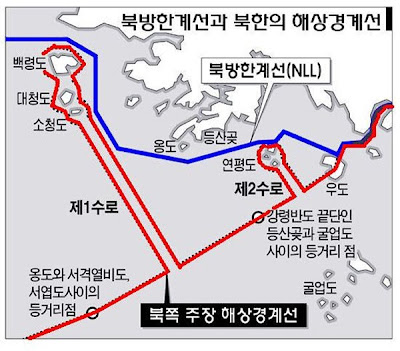 The blue line is the NLL, a line that is basically follows the principle of equidistance between DPRK territory and ROK territory. The five outlying islands (서해 5도, Sŏhae-odo) that are firmly under South Korean control (and where ROK civilians live and work) project maritime territory that North Korea wants.

By contrast, North Korea proposes the red line, which follows the principal of equidistance from the Korean mainland, allowing for a corridor of access to each of the ROK islands that are on "North Korea's side" of that line. Note that North Korea's proposal runs completely counter to international norms, nor does it actually control any of the waters it is claiming that are south of the NLL.

North Korea has for some time been pushing the idea that the NLL is unfair and should be reworked. While originally behaving relatively diplomatically in that push, it has at least since the late 1990s been acting out militarily in support of its claim, with occasional NLL crossings and even random shelling of the South Korean side of the NLL.

But this is now a bit of a game changer. I will look for the KCNA report myself (I just don't trust anyone, especially journalists, to tell me what something says unless I read it myself), but if North Korea is suggesting that Yŏnpyŏng-do specifically needs to be liberated, and in light of their apparent threats of a second and third attack, we may have a real mess on our hands. Doing nothing will definitely not be the correct course of action.