Kushibo's big post-G20 FTA post: Anti-FTA crowd says Korea is "like China" (and other notes on the FTA)

We've heard this refrain before: some variation of anti-KORUS FTA sentiment that Americans shouldn't support the free-trade agreement with South Korea because "Americans have... been deeply wronged by Korea and its neighbors." Never mind that it's simply not true.

This guest-blog piece in Foreign Policy follows much the same theme. It even says that South Korea is a currency manipulator "like China," as if South Korea's attempts to control spikes and dips are anything akin to what China has been doing. If South Korea were "like China," it wouldn't be allowing the KRW to float as much as it does, bobbing up and down from 900 won to the dollar up to 1300 and the 1600 and down to 1100 and then upward again.

But what do we expect from protectionists and unionists aimed not at helping workers at large but at securing their own jobs at the expense of others'? (At TMH, Wangkon says the writer of that piece is from an institution that is "a poorly veiled mouthpiece of the organized labor.")

As usual, I'm cautiously optimistic, and I still expect some sort of agreement on the already signed agreement to be made. That it didn't happen at the G20 meeting was a setback, but not fatal blow by any means. The FTA is important on its own merits, but it is also a major piece of a bigger puzzle we don't want to walk away from. 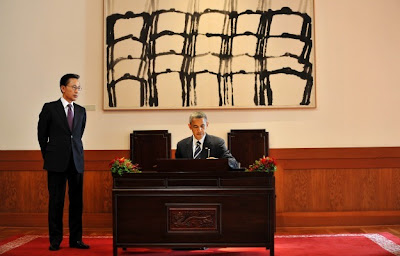 President Obama himself provided the cautious optimism and made clear that this setback did not mean the FTA was not over by any means:


The two sides pledged to continue the discussion, and said that they had made progress in recent days toward narrowing disagreements.

"We have asked our teams to work tirelessly in the next days and weeks to get an agreement, and we are confident we will do so," President Obama said after his meeting with South Korean President Lee Myung-bak.

Obama said he didn't "want months to pass before we get this done. We want it to be done in a matter of weeks."

A few more weeks will give them time to, as US Trade Representative Ron Kirk says, "get it right" instead of just getting it done. And by "getting it right" they mean getting Seoul to strip away environmental protections to make heavily polluting Fords and Chryslers cheaper, while trying to mix older beef South Korean consumers find questionable with the quality younger American beef that is actually quite popular. Capital strategy there.

[UPDATE: Courtesy of The Marmot's Hole commenter cm, here's an excellent piece in the National Review Online mocking the apparent Democratic Party position that what's wrong with the FTA is that i imposes environmental standards that are too high.]

At Bloomberg's TV arm (via WaPo), the US Ambassador to South Korea, Thomas Hubbard, enthusiastically makes the post-G20 case that the FTA with Seoul is still a top goal, and he expects the agreement to go to Congress early next year.

At this point of final re-negotiations, it's all about cows and cars, but the beef industry itself, supposedly being advocated for by the holdouts, has urged speed in getting this done:


American beef exporters are pushing the Obama administration and Congress to approve a pending trade agreement with South Korea without delay rather than hold out for concessions on their behalf.

U.S. exports of beef are up 175 percent in the first eight months of this year to $331 million, regaining sales that collapsed following concern about mad-cow disease that sickened animals in 2003, according to Commerce Department data. Australia and Canada are pursuing their own free-trade agreements with South Korea, and their suppliers may gain on U.S. producers, according to the American Meat Institute.

“The market is coming back and it would be a shame to lose this opportunity,” said William Westman, vice president for international trade at the Washington group, which represents companies such as Tyson Foods Inc. and Cargill Inc. American exporters “don’t want to be put at a disadvantage to our competitors.”

That means the beef industry is now at odds with US Senator Max Baucus (D-Montana) who, in supposedly acting on their behalf by holding up the FTA for several years now, has said "no deal is better than a bad deal." Yeah, right.

Meanwhile, the Ford dealership in Seoul is not at all pleased that the deal has not gone through. The FTA would mean cheaper cars, and even though some of the luster of foreign goods is their heftier price tag, that's not true for all South Korean consumers, and no doubt more of them would be walking through Ford's door.