Some people think I only write shiny, happy stories about people in Korea holding hands, that I ignore all that bad stuff because I'm trying so hard to protect Korea's image, whatever that means.

Well, on the off chance they're right — and they might be, if you ignore all the critical stuff I write — I thought I would print, without editorial input, the following comment from another blog:


Korea is like a retarded prostitute's pussy.People from around the world come to Korea to fuck it. Do we care about her long term well-being, probably not. Will we call in the morning , Hell no. All the expats you see are here to fuck it for all it's worth and then get the fuck out of here.Some are here to bust that student loan nut, others are pounding away to pay for grad school , still others are creaming all over the Han River to finance their walkabouts. Now I'm only doing a little bit of fucking I teach my contract hours and generally stay out of the way. But I know a lot of fellas fucking Korea like they have three dicks. They are teaching private lessons, on tourist visas, and boning k-girls like they just discovered sex. And all of that is o.k. because Korea wanted it. Like a cheap floozy. But what about your articles on Korean bullshit you say? That's just locker room talk. If a friend asked me if he should ask a retarded girl out I would say she's fucking but this is the retarded bullshit you have to deal with to get to the ass. After reading my blog some people might say that retarded bitch Korea isn't worth it while others would love a chance to fuck retarded Korea, retardedness be damned. As for me I still recommend Korea for some easy retarded pussy. She's gotten a little arrogant in the last two years but she'll let you fuck her if you are persistent.

There, Mike in Korea, I've just increased your audience by at least twenty-four. 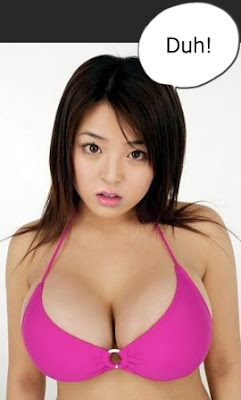 [above: This picture came with the original post, so it was only fair that I reprint it, too. If you're wondering about the head tilt down and upward glance pose, many women in Korea, Japan, and other East Asian countries prefer to take pictures with their head positioned this way because it creates an optical illusion of sorts, seeming to enlarge the size of the eyes and other features.]