AP, via USA Today, has a write-up on Jong Tae-se, a striker who is their best hope for actually getting a goal during the upcoming FIFA World Cup to be held in South Africa:


The experts give North Korea very little chance of even getting a point at the World Cup, but if any national team relishes standing up to soccer superpowers Brazil, Portugal and Ivory Coast it is the one led by ambitious striker Jong Tae-se.

Little is known of the team from reclusive North Korea, which is preparing for a first appearance at football's quadrennial showpiece since 1966 when it shocked the world by defeating Italy en route to the quarterfinals. But in Asia, Jong is a star.

Powerfully built, speedy and nicknamed 'The People's Rooney' -- after Manchester United and England striker Wayne Rooney -- by the South Korean media, the 24-year-old is his team's best chance of producing a shock. He knows that the World Cup is his best chance of a dream move to the English Premier League.

"My target is to score a goal a game," Jong told The Associated Press in an interview. When asked if that meant a total of six or seven at the tournament, the steely gaze melted and he said, laughing: "I don't know about that!"

One of the leading strikers in the Japanese J-League with Kawasaki Frontale, Jong was born in Japan and educated there under the North Korean system.

Jong is fiercely passionate about playing for his country. When North Korea played South Korea in a 2010 World Cup qualifier in March 2008, he cried during the north's national anthem [below].

Think how much he'd be crying if he actually had to live in North Korea.

At any rate, it will be interesting to see how the Korea, DPR team does. If they some how do miraculously well, I fear it will sweep away some of the animosity and disgruntlement people have been feeling lately. Good for Dear Leader, bad for everyone else. 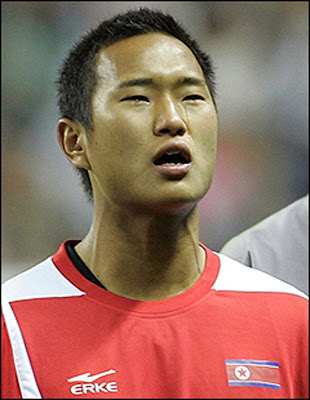