The Korean-language website of Yonhap is saying that North Korea's Dear Leader may have arrived in China, presumably on his way to Beijing. [UPDATE: Reuters has the story.]

Or at least, Rail Force One (the special train he rides around in because they won't let him past the "you must be at least this tall to go on this ride" sign at the airport he's afraid to fly) arrived in Dandong at 3:50 a.m. 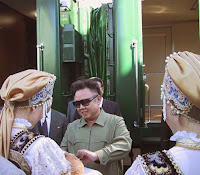 If that's true, it's an interesting turn of events. First we had reports that KJI would be heading to Beijing to meet his sponsors by the end of March, to which I said it would be a good time for a brown parade (a coup), and then we had reports that second-ranking leader Kim Youngnam visited in his stead.

This is an awfully interesting time to leave the country. There is a threat of unrest from disgruntled masses and even local cadres angry about the Great Currency Obliteration of 2009, perhaps a growing unease among the apparatchiki with the idea of Kim Jong-il's inexperienced progeny (i.e., Kim Jong-un) taking over the reins of government, and an angry and decidedly Sunshine-averse (Moonshine-loving?) administration in Seoul that may be on the verge of saying the sinking of the Chonan was due to a North Korean mine, submarine, or torpedo, and responding in kind.

Is this the best time to leave the country? More than ever, Fat Boy Kim, your gangster trippin' days in Pyongyang may be over, one way or another. And by that I mean either coup or worse (worse for you, that is). 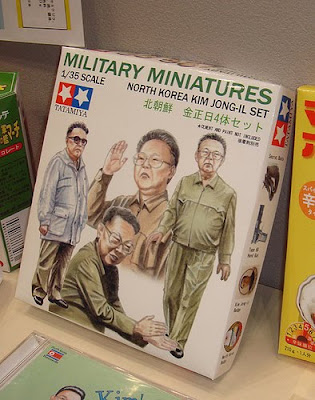 [above: I'm really running out of fresh Kim Jong-il pictures.]