Every female and every boyfriend of every female who doesn't drive but has a boyfriend knows about Forever21, a $2-billion mecca of cheap but fun fashion that has quickly become a powerhouse in the US (and has made its way to Korea). 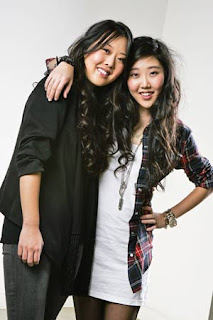 The chain was founded by a Korean-American immigrant couple, Don and Jinsook Chang, but this Los Angeles Times report suggests that the couple's daughters, Linda and Esther, may be the secret weapon behind their success:


the real secret weapon may be a couple of women who look as if they're barely out of high school. Linda Chang, 28, and her sister Esther, 23, the Ivy League-educated daughters of Forever 21's Korean American founders Don and Jin Sook Chang, seem to have the stylish eye and marketing savvy to take the $2-billion brand into the future and make it a competitor on a global level with European fast-fashion giants H&M, Mango and Zara.

The Chang sisters joined the L.A.-based company a little over a year ago — Linda to run the marketing department, and Esther to spearhead visuals, including graphics, store displays and window design. Linda is the quintessential young professional in Alexander Wang boyfriend jackets and Forever 21 jeans, cooking lasagna on weekends for friends in her Hollywood apartment. Esther, the Gen Y younger sister in Forever 21 denim shorts, a TopShop flannel shirt and American Apparel knee-highs, still lives at home with mom, who is Forever 21's chief merchandising officer, and dad, who is chief executive.

Fashion isn't rocket science or a cure for cancer, but I like seeing shops that provide nice clothes at affordable prices, especially if I'm the one who might end up paying. So I'm glad the Changs stuck it out in the early years:


Don and Jin Sook Chang, who were born in South Korea and immigrated to Los Angeles in 1981, embraced the fashion business while Don was working at a gas station and noticed the best cars were driven by clothing merchants. The couple opened the first Forever 21 store in Highland Park in 1984; initially, the merchandise was similar to the clothing you'd find in the stalls in downtown's Santee Alley: cheaply made knockoffs.

There were some lean years in Koreatown while the Changs built the business, but eventually, Linda said, the family had enough money to afford private school — Buckley and Harvard Westlake — for the girls and a Beverly Hills estate.

Living the dream. Good on you.